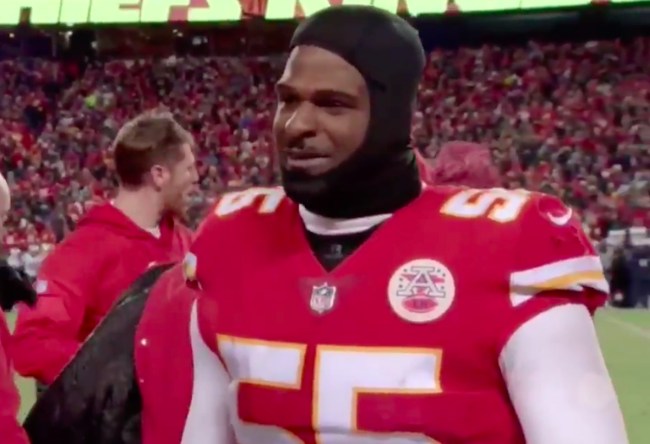 Over the weekend, the four remaining teams in the hunt for the Lombardi Trophy competed in their respective conference championships and NFL fans got everything they wanted and more.

It’s been over three days but people are still talking about the matchup between the Saints and the Rams thanks to an incredibly controversial no-call that arguably screwed New Orleans out of an NFC championship and a spot in Super Bowl LIII.

It was a hard act to follow but the Patriots and the Chiefs did what they could in their showdown, where Tom Brady did Tom Brady things and helped New England secure yet another AFC crown by leading his team to an overtime win.

The Pats needed a touchdown with under two minutes remaining in the game, and based on Brady’s history, it was basically a foregone conclusion they were going to score.

However, things went slightly awry when Brady appeared to throw a game-sealing interception that was negated after Dee Ford was flagged for lining up offside prior to the snap.

My view from the stands of the play that kept the Chiefs out of the Super Bowl. You will see that Dee Ford is more than a little off sides. #GoChiefs pic.twitter.com/vG3z8ROPkX

After the loss, Chiefs fans lashed out at Ford (and some British woman named Dee Ford) by defacing his Wikipedia page in outrage.

Lmaoo someone put Dee Ford known for being offside on wiki pic.twitter.com/LeIlZz8HTQ

Following the game, Ford took full responsibility for the brainfart:

On Tuesday, NFL Films released a recap of the championship that featured a clip of Ford reacting to the call. If your heart doesn’t break a little bit after watching this then you’re a stronger person than I’ll ever be.