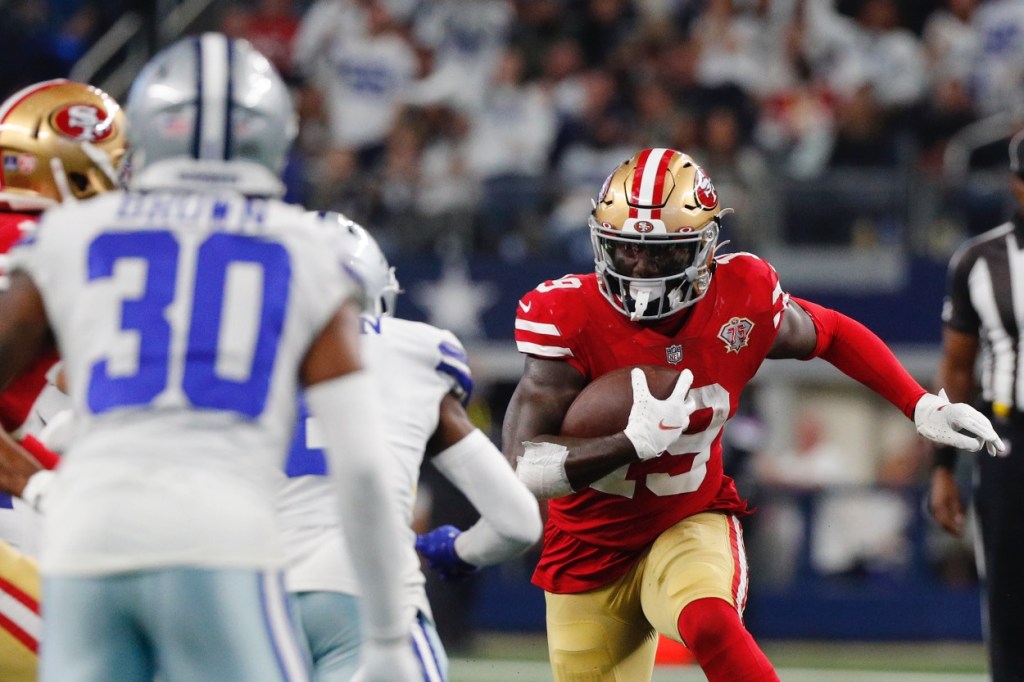 San Francisco 49ers Deebo Samuel had a monster season and was 5th in the NFL in receiving yards (1405) with 9 receptions over 40 yards. He was only about 500 yards behind Cooper Kupp on the season and he did it with about half of the receptions (145 to 77).

On Sunday’s Super Wild Card Weekend matchup between the 49ers and Cowboys, Deebo Samuel came up with a huge 26-yard touchdown that ended up being SF’s last TD of the game. It came right after cornerback K’Waun Williams intercepted Dak Prescott.

After the interception, Deebo Samuel went straight to 49ers head coach Kyle Shanahan and told him he wanted the ball. On the next play, he scored a 26-yard touchdown after it looked like the entire play was falling apart. Later, Shanahan would praise Deebo Samuel for demanding the ball and stepping up in that situation.

How did Deebo even find this hole? 😱 @19problemz#SuperWildCard | #FTTB

That’s the play where Deebo Samuel scored a TD against all odds because that’s not how the play was drawn up at all. Kyle Shanahan told the 49ersWebZone how that’s now at all where the play is designed to go and now how he thought it would go.

“It was unbelievable. It’s not at all where we thought the play would go, where it’s designed to go. Usually he goes outside, but he stopped, reversed the field, and if he gets a lane, he’s running through everyone’s arm tackles”

They got there because Deebo Samuel ran over and told his coach he wanted the ball. He called his shot like Babe Ruth and that touchdown ultimately ended up winning the game for San Francisco.

Kyle Shanahan said: “Deebo’s been a stud all year, as everyone knows, and right before he went out there, he just mouthed something to me, which I kind of guessed it was, ‘Give me the ball.’ When I look at him talking that way, it’s extremely motivating, and he makes it a lot easier to call plays.”

Deebo told Shanahan, "just gimme the ball, I got you," after K'Waun's interception 😤 pic.twitter.com/ddVex38NJY

After K'Waun Williams' interception, Deebo Samuel told Shanahan to give him the ball and that he'd take care of the rest.

Garoppolo: "I saw him look at Kyle. He had that look in his eye."

Samuel cutback TD happened on the very next play

Quarterback Jimmy Garoppolo corroborated the interaction, he told reporters he was walking onto the field with Deebo Samuel and said he “saw him look at Kyle. He had that look in his eye, and Kyle made a great call, let the guy go make a play.”

After that Deebo Samuel touchdown, the Dallas Cowboys would kick a field goal (23-10) and then score a 4th quarter touchdown (23-17) before ultimately losing the game. The final sequence was surreal with Dallas running a QB sneak as time was running down and then not being able to get set for a final play because the referee didn’t place the ball in time.

After that, Cowboys fans started throwing stuff at the refs. Skip Bayless lost his mind. Mike McCarthy was clueless about the clock. And fans were crying.