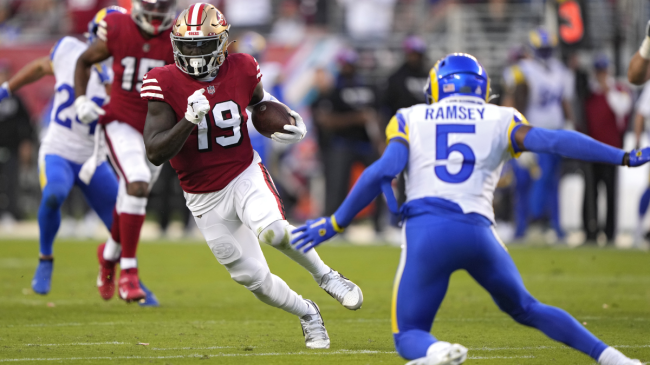 Deebo Samuel had himself quite a night on Monday, helping his 49ers take down the division rival Rams in primetime. The dynamic pass catcher hauled in six catches for 115 yards and a score.

Samuel had the play of the day in the second quarter, reeling in a short throw before scampering 57 yards for a touchdown. He was able to elude a number of would-be tacklers on his way to the endzone, running through, over, and around the Los Angeles defense.

On Monday night, he got a dose of his own medicine.

After aiding his team in that divisional win, Samuel trolled the LA defensive back on social media. Deebo re-posted a video on his Instagram account of the long touchdown run where he ran through the Jalen Ramsey on his way to pay dirt.

Samuel wrote, “Shut the lights off Boogeyman,” as the caption on a slide show that detailed that impressive catch and run from start to finish.

Tough look for Ramsey, who’s now been on the receiving end of this type of mockery from both Deebo and Bills’ wideout Stefon Diggs.

Samuel, meanwhile, will relish in his performance over the next few days before heading back home to the Carolinas to help the 49ers take on the Panthers in Week 5.