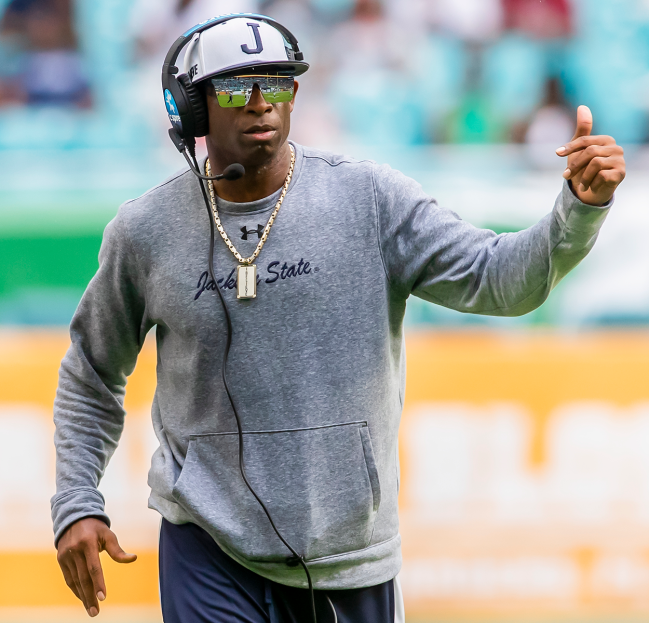 Deion Sanders has been the head football coach at Jackson State since September of 2020. Prior to his time on the sidelines, Coach Prime was one of the most explosive players in college and NFL football history.

But he doesn’t think that he would have been ranked higher than a three-star recruit.

When Sanders was going through the recruiting process in the early 1980s, it was completely different than it is today. There was very little way for fans to keep track of their team — or any team’s efforts on the recruiting trail and the 247s, Rivals, and On3s of the world did not exist.

Players weren’t ranked based on position, state or nationally. Schools mostly found out about recruits through word of mouth. It wasn’t a big database like it is now.

As a result, Sanders doesn’t pay much mind to rankings or stars as he recruits high schoolers and transfers to play for him at Jackson State.

In a recent conversation with comedian Desi Banks, Sanders said that the reason he doesn’t care about the recruiting rankings is because he thinks he would have been a three-star prospect out of high school.

“I ain’t got time for that,” he said. “Because I probably would have been a three-star coming out. Because I played quarterback and I wasn’t going to college as a quarterback. So I wasn’t probably no five-star.”

As a result, when Sanders and the Tigers staff is on the road scouting players or in the film room looking for their next targets for a specific recruiting class, it’s less about ranking and more about mindset. Obviously, talent plays a role in the process, but Coach Prime believes that he can teach his guys into becoming the five-star caliber player if they are willing to buy in.

“We’re looking for those type of kids,” he said. “I’m looking for the young Desi Banks that’s got it together mentally. He may not be that diamond that’s shining right now, but I can polish him and in about a year, or year and a half he’s going to be straight. He doesn’t need 3, 4, 5-stars. I don’t need that. I just need you to want it and look me in the eye and mean what you want.”

In addition, Sanders said that he has a responsibility to be more than a football coach. While getting his players to the next level is the ultimate goal, he knows that is not the reality. And in the age of Name, Image and Likeness, Coach Prime thinks that some high school recruits and transfer portal targets aren’t focused on the right reasons.

“95% of these kids are not going pro,” Sanders said. “So I’ve got to build a man and get him ready for life. But see, it’s a whole different game. When you’re recruiting these kids now, and their family members or whoever their significant person is, now it’s about NIL. It ain’t about what’s best for the kid, it’s about how much money I’m going to get.

“It’s a whole different game, which devastating to these kids because some kids are going to a different place because they got a bag and that place doesn’t even fit your style of play.”

Despite all of his comments about rankings and stars, Sanders has been crushing it on the recruiting trail. He landed the No. 61 overall class in 2021 and the No. 74-ranked class in 2022, which included the nation’s top-ranked recruit, Travis Hunter. While 61st and 74th may not seem like a big success, it is incredibly impressive for an FCS, HBCU program.

You can find Sanders’ full conversation with Banks here: