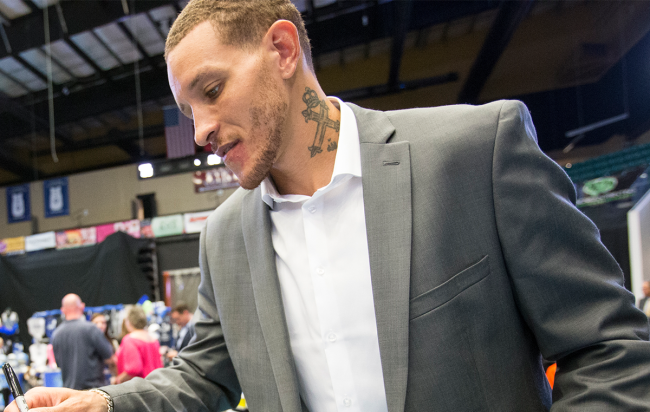 A lot of professional athletes find themselves as lost as Brooks was after he was released from prison in The Shawshank Redemption after being thrust into a life that doesn’t revolve around sports, and the sudden lack of structure and purpose can be tough enough to deal with even if you’re not faced with the issues that Delonte West has grappled with over the course of his life.

Delonte West had a solid career in the NBA but found himself constantly struggling with mental health issues during his stint in the league, and when his time playing basketball came to an end, it marked the start of a battle that’s unfolded in a fairly tragic fashion over the past few years.

Last year, a disturbing video of the former guard being assaulted while seemingly living on the street gave plenty of people cause for concern, and when a picture of him apparently begging for money on a corner in Dallas surfaced in September, there was an outpouring of support from people desperate to get him the assistance he’d been resistant to accept in the past.

Anyone who’s familiar with substance abuse likely knows how difficult it can be to either accept you need to get some help or convince someone you know to address the problem, but thankfully, Mark Cuban was able to do exactly that when he tracked down the former Maverick and waited with him in a hotel room before his family arrived to successfully persuade West to check into a treatment facility the owner happily agreed to cover the cost of.

Since then, we’ve been treated to a steady stream of great news thanks to the updates showing the progress West has made since entering recovery that suggests he’s in a much, much better place than he has been.

Because we all want something to feel great about today, here is your Delonte West update. It's still an uphill battle, but he is climbing ! pic.twitter.com/qLDVJDrSOQ

Thanks to how much a bitch addiction is, you’re never really “finished” with your recovery, but according to Shams Charania, West has made a big step forward, as the reporter has learned he’s now landed a job at the center in Florida where he managed to start turning things around.

Update on Delonte West: West now has a job at the Rebound therapy center in Florida, which is the rehab facility he attended.

Dallas Mavericks owner Mark Cuban reunited West with his mother in September and has stayed in close contact.

Having a solid support system in place is also huge when it comes to trying to stay sober, so you have to give major props to Cuban for not only helping to kickstart the process but making sure West knows he has at least one person he can hit up when he needs someone to talk to.

Again, these are just the first steps in a difficult journey West will have to navigate for the rest of his life, but you have to love the direction he’s going in.