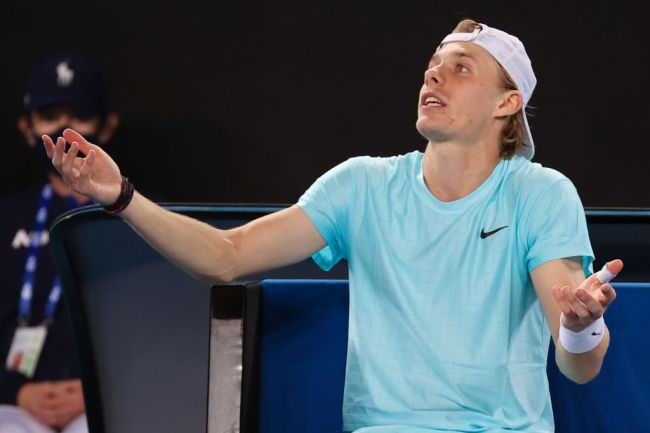 Denis Shapovalov was fuming about being denied permission for a a bathroom break between the fourth and fifth sets of his first-round Australian Open win over Jannik Sinner. He even threatened to relieve himself into a bottle if the umpire didn’t allow him to leave the court.

“What happens if I go?” asked Shapovalov. “Do I get a fine? I don’t care. What do you mean I can’t go? Are you going to disqualify me? I have to pee!”

Shapovalov’s request for a stoppage in play was denied because, according to the rules, a player who has called for a medical timeout is not allowed to leave the court while waiting on medical help. The 21-year-old World No. 12 had dropped the fourth set to his inferior opponent and hilariously took his frustrations out of the chair umpire.

Thankfully, he did not carry out his threats of courtside urination and was allowed to leave the court and relieve himself during the next break. The Aussie Open’s No. 11 seed went on to avoid a second-straight loss in the first round of the tournament, surviving a five-set thriller against Sinner. Shapovalov lost to Marton Fucsovics in four sets at the same stage last year.

He spoke to the media after the match and played down the hostility of the in-match exchange, but questioned the rule book.

“I was just blowing off steam, just kind of cooling my head, getting rid of it,” he said. “But also, I do think it’s a dumb rule. Especially for me — I’ve got the smallest bladder ever, so I literally got to take a piss every set. It’s difficult, especially when you’re on that court for so long. Before the match I’m trying to hydrate as much as possible. So year, I gotta pee.”

Shapovalov will next face Australia’s Bernard Tomic in the second round of the Aussie Open. Perhaps he should take an extra moment to use the restroom before the match to avoid another incident.