Absolute Pandemonium Unfolds In Copenhagen As Denmark, Against All Odds, Qualifies For The Next Round Of The Euros 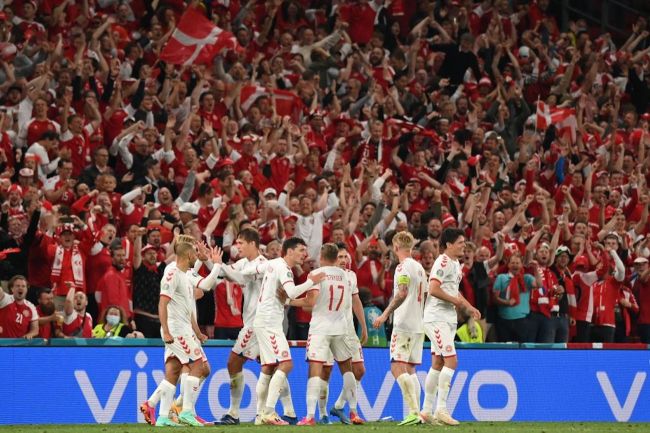 Sports. They divide and unite. They depress and inspire — perpetuate both despair and hope. At the end of the day, though, it’s just a game, right? Grown men wearing a particular set of colors running up and down a field or a gym, competing against and sweating on an opposing group of adults wearing different colors, right? Wrong. Absolutely wrong.

There are moments, albeit increasingly rare, where the intricacies of the product that professional sports have become fall away, and all we’re left with is the passion of the people who propel it. There’s no corny social media marketing, no commercials. No alternate jerseys on sale, no $15 beers to drink. No coaching changes, no trades. Agents and contracts all but disappear. It’s in these moments that sports become what they truly are and what they were always meant to be: a celebration of life, of community — a display of spirit and togetherness.

Today, halfway across the world in Copenhagen, the Denmark national team — just nine days removed from watching in horror as their teammate and brother Christian Eriksen nearly died on the pitch — provided us with one of those moments.

Heading into today’s final group stage matchday, Denmark sat on zero points following a valiant 2-1 defeat at the hands of Belgium and a 1-0 loss to Finland in the hours following Eriksen’s cardiac arrest. While not impossible, Denmark’s odds were certainly slim: in order to advance, they needed to beat Russia by at least two goals and have Finland lose to Belgium.

The first goal came in the 37th minute thanks to a gorgeous curler from Mikkel Damsgaard, the 20-year-old who just so happened to take Eriksen’s place in the line-up:

Damsgaard with a worldie to put Denmark ahead 😍 pic.twitter.com/wTBue2kATE

15 minutes into the second half, Yussuf Poulsen put the Danes ahead thanks to a gift from the Russians. The celebration was certainly unhinged, but the job had yet to be completed, as Finland was still locked in a 0-0 draw with Belgium at this time.

Just a few minutes later, chaos unfolded: Belgium seemed to take the lead through a Romelu Lukaku strike, however, VAR eventually overturned the call for offside. Quite literally simultaneously, Russia was awarded and scored a penalty, cutting Denmark’s lead down to one. With just about 20 minutes left on the clock, magic was now required. And magic is what we got.

In the 74th minute of the Finland game, Belgium took the lead thanks to a calamitous own-goal by the Finnish keeper. No more than a couple of minutes later, Denmark defender and Champions League winner Andreas Christensen lasered in a rocket from 30 yards out, restoring Denmark’s required two-goal lead. Cue absolutely pandemonium in Copenhagen.

A GOAL FOR ALL OF DENMARK! 🇩🇰 pic.twitter.com/7OzR4R1y3a

The Danes would go on to tack on a fourth goal while Belgium would add a second, effectively securing Denmark’s passage into the Round of 16 — all of this just barely a week after one of the most harrowing sports scenes of the century so far unfolded right in front of their eyes.

DENMARK HAVE DONE IT!

Barely a week after their teammate Christian Eriksen nearly died on the pitch, #Den — who had 0 points entering today — rallies in the final group stage matchday to advance to the #Euro2020 Round of 16.

This is what it means. pic.twitter.com/sNZd4pBAd5

Denmark will now take on Wales in the Round of 16 on Saturday. The Danes are ranked seven spots ahead of Wales in the FIFA World Ranking, which will likely make them the favorites in the match.

Even if you aren’t a soccer fan, odds are, you’re now a Denmark fan. You should be, at least, as there likely won’t be a better sports story in 2021.