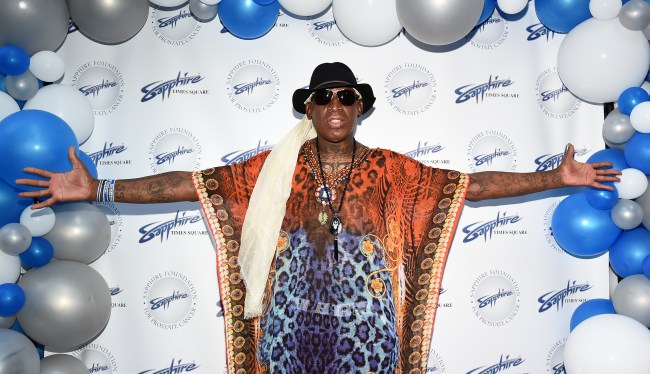 Dennis Rodman was one of the grittiest players in NBA history, which helped him win five championships, earn two Defensive Player of the Year awards and, eventually, reach the Basketball Hall of Fame. While Rodman’s antics may not have been for everyone, on the floor, he gave absolutely everything he had, never sacrificing an ounce of energy or cutting corners, which seemed to always be appreciated by his teammates and coaches.

Despite all the weird stuff off the floor, Dennis Rodman the basketball player was as good as it got — but he’s always been one of the most interesting athletes in the world, too, which is why tonight’s 30 for 30 about him entitled “Rodman” should be a must-watch. Here’s a quick look at the trailer.

Given the fact that documentary about his life’s about to release tonight, The Worm’s been making the media rounds — which included us here at BroBible — where the flamboyant personality has talked about a myriad of topics to help promote the film.

During an interview with Bleacher Report‘s Sean Highkin, Dennis Rodman was asked about which current NBA player most resembles his own game. While it’s hard to imagine anyone playing as aggressively as Rodman did, the former baller did offer up one suggestion: Draymond Green. Take a look at why The Worm thinks it’s Green who plays with the same type of passion that he once did on the basketball court.

“Players have to have the heart to go out there and do whatever they have to do to win. That’s who I look at. You’ve got the Steph Currys, the LeBron James, players like that. But I want to see the player that says, “OK, I want to be the player that stands out to do my job and earn the money for the role that they’re paying me for.” That’s what I’m looking for. I don’t see that player out there,” Rodman told Sean Highkin of Bleacher Report. “Draymond Green is something sort of like that. But besides him, I don’t see other players who have that passion, who have that love, that drive, they need basketball. No money, no fame. They have three hours of their life, “I’m going out to do my job, to win for people. I’ll get the gratification at the end of the day when I have a ring on my finger.” That’s the kind of player I’m looking for.”

In a league dominated by superstars like LeBron James, Steph Curry and Kevin Durant, among others, Dennis Rodman is right to point out Draymond as a guy who does all the dirty things without asking for much glory — other than winning. Green has that blue-collar mentality like Rodman did, and isn’t afraid to play with emotion; even if it does cost his own team at times.

Although Draymond recently inked a massive contract extension with the Golden State Warriors, here’s to hoping that the money doesn’t change him. While there will never be another Dennis Rodman, Green probably is the most likely candidate for the current player resembling the way Rodman played, so here’s to the Warriors star continuing to show he’s willing to lay it all on the line for his team.

And make sure to peep the 30 for 30 about Dennis Rodman, “Rodman”, which will be streaming on ESPN+.