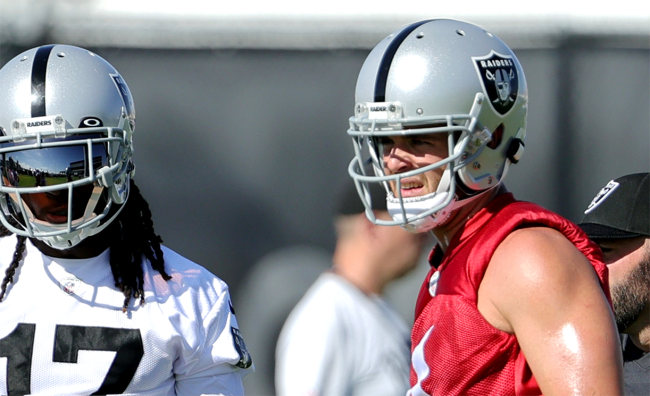 Las Vegas Raiders quarterback Derek Carr, who new wide receiver Davante Adams says is a future Hall of Famer, has run out of patience with all the naysayers.

Last week, Carr was asked about the upcoming season. His response was a little testy.

“It’s going to be fun,” Carr said. “No one thinks anything of us and I think that’s what makes it fun is you always have to put the ball down and play the football games.

Carr added, “You get frustrated when you see other people’s names on things and this and that. And you’re like, ‘We’re here, too. We feel like we got better, too.’ I thought we made the playoffs.”

He also said that he and his teammates have a chip on their shoulder, something that was certainly apparent during his interaction with Paul Gutierrez on Tuesday when the long time ESPN NFL reporter brought up Carr’s “no one thinks anything of us” quote.

“That crap don’t matter, you know,” said Carr. “We have to go play the football games, and that’s honestly how I feel. I just got to be more honest. I just got to start speaking my mind and as I’m getting older, I just say what I want to say. And so my real answer is the expectation, all that kind of stuff who says that, honestly, it doesn’t matter, it really doesn’t, whether they don’t say anything or they say a lot. Nobody cares. Hopefully, they talk about us at the end, you know what I mean? But right now, that crap don’t matter.”

Paul Gutierrez then followed up Carr’s statement by asking, “If it doesn’t matter, Derek, why do you talk about it?”

“I say it because I’m a positive person, and I try and encourage my teammates,” said Carr after sarcastically telling Gutierrez it was so good to see him. “There’s a way that I say things to encourage my locker room to maybe put a chip on their shoulder, and sometimes I do it too much. And so I don’t appreciate your tone either, you can pump that back a little bit.”

NFL fans weren’t exactly sure what to think of this new, more aggressive-talking Derek Carr.

Lmao took that way too personally

Carr looked like he wanted cry after checking homeboy. I kinda wanted him to double check him again

Translation: I just got paid, it’s def my last extension here if I don’t win, so IDGAF anymore… also, don’t criticize me, I can’t take it. It matters a lot.