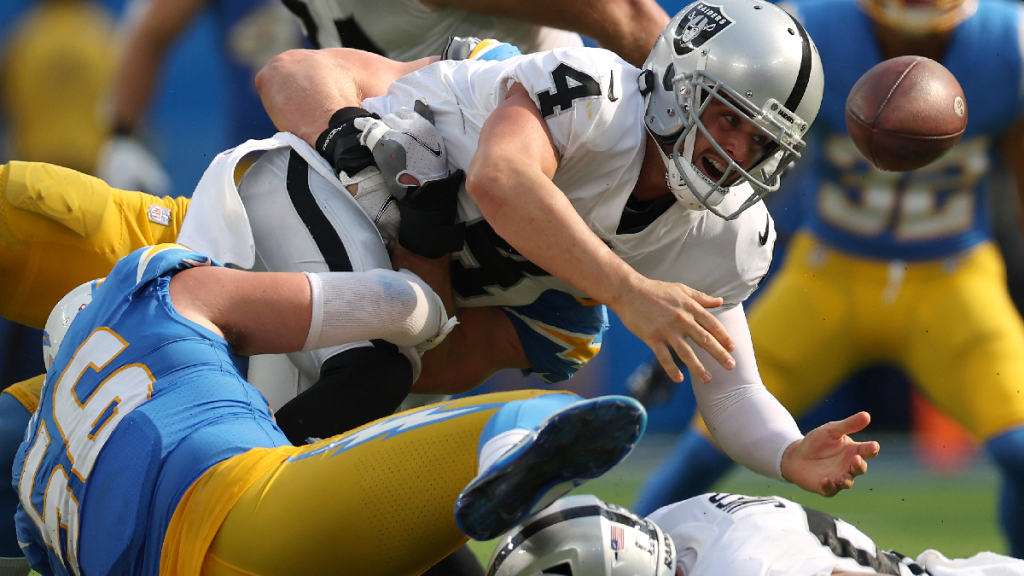 Those expectations of Derek Carr came to a screeching halt on Sunday when the Raiders faced the Chargers in Week 1 and Carr proceeded to have a horrendous debut. Carr threw for 295 yards, 2 touchdowns, and THREE interceptions against the Los Angeles Chargers.

After the game, Derek Carr spoke with the media and attempted to do damage control about his horrible season debut. And he makes some very valid points in his candid comments.

Derek Carr Attempts To Do Damage Control With Candid Message

Derek Carr: “We did too many good things and I was way too aggressive. We came in with an aggressive mindset, especially with all the weapons that we have. That’s on me, the decisions to be too aggressive in certain moments.

“We’ll turn on the film and I’ll be better. I made way too many aggressive decisions when I didn’t have to. That’s what it came down to — me forcing the ball to my guys in moments I didn’t need to.”

“At the end of the day, they ended up beating us. But, are there signs that we’re going to be a good football team? Yeah, absolutely. There’s no panic. I’ve been out there when it’s hard. I’ve been out there when it’s hard to get a first down, it’s hard to stop somebody. And that’s one of the best teams in the league. And it didn’t like it was so hard to where we couldn’t accomplish something.”

Carr: "There is no panic button. That is one of the best teams in the league."

Was it just a weird Week 1?

I don’t think anyone is worried about how these quarterbacks will progress throughout the season. Several of Derek Carr’s interceptions were caused by his aggression, which he discussed. It’s been a LONG offseason and hopefully he’ll be able to find his rhythm soon.

They want to win NOW.

It’s going to be a LONG season if they keep playing like that:

The whole division is "one of the best teams" in the league! Definitely no panic button in week 1 but there's gonna be alot of games like this in the AFC West!

Joe Burrow threw 4 ints and lost to the Steelers led by Mitch Trubisky … We lost to a good team it’s week 1 got 16 more games to go ..

Derek Carr and the Raiders will now host the Arizona Cardinals in Week 2 of the 2022 NFL season.