Anyone Else Find It Hilarious That Derek Carr Said He’d Quit Football If The Raiders Ever Got Rid Of Him? 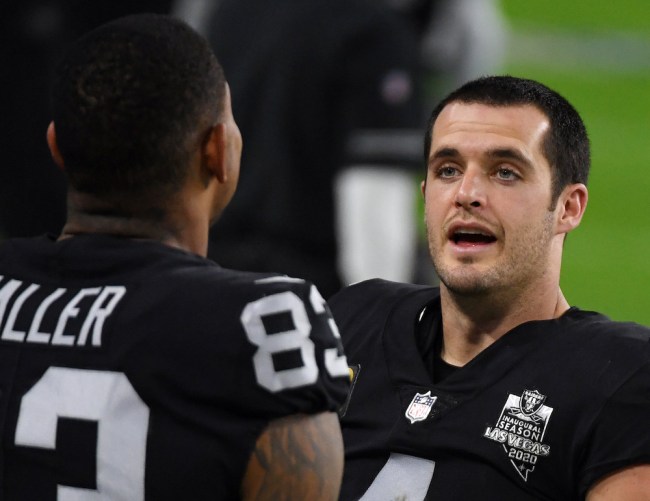 I admire the hell out of Derek Carr, man. Not only is the guy a total gamer who is annually underrated, but the Las Vegas Raiders quarterback sounds as if he’s living the dream right now — I guess that’s what $40 million guaranteed gets you, right?

While Carr is a good (not great) NFL quarterback, there always seem to be rumors about whether the Raiders will stick with him or look for a replacement. Part of that’s because head coach Jon Gruden inherited the player — which typically leads to changes. But Gruden has stood by Carr for the past few seasons, showing support for his starter.

It seems as if that type of loyalty has impacted Derek Carr. So when he was asked about all those rumors about possibly being traded or released, he didn’t hesitate in showing how much love he has for the Las Vegas franchise. He even went as far as saying he’s quit football should the team get rid of him.

“I’d probably quit football if I had to play for somebody else,” Carr said following Tuesday’s mandatory minicamp practice in his first public comments since the end of last season. “I am a Raider for my entire life. I’m going to root for one team for the rest of my life — it’s the Raiders. So, I just feel that so strong in my heart I don’t need a perfect situation … to make things right.

“I’d rather go down with the ship, you know what I’m saying, if I have to.”

“I’m that old-school mentality — I’m playing for one team and that’s it,” he said. “Whether we’ve won enough or not, I literally give every bit of energy and effort that I can to this organization and when I sign a contract, I completely, in my mind, have to fulfill that. I committed to that. I put my name on paper.

It’s this kind of attitude that makes it easy to root for Derek Carr. But, c’mon, should anyone really believe that the quarterback would quit if Jon Gruden and the Las Vegas Raiders got rid of him? Absolutely not. If Tom Brady can move on from the Patriots and Aaron Rodgers can stand his ground against the Packers, Carr should be able to envision himself with another NFL team, too.

I admire the loyalty and the weight the quarterback’s putting on his shoulders. He’s aware of the fact that he hasn’t won enough games or performed well enough. But nobody in their right mind is openly walking away from millions of dollars just because he plays for another organization. That just doesn’t happen — well, unless you’re Michael Jordan.

But Derek Carr is very much not Michael Jordan, and the thought that he’d sacrifice his entire NFL career — and lots and lots of money — for the Raiders is a hilarious thought. So let’s just assume Carr was speaking out of desperation here, and that he’s just doing anything he can to prove to the team that he’s “Mr. Raider” who love the franchise more than anything else in life.