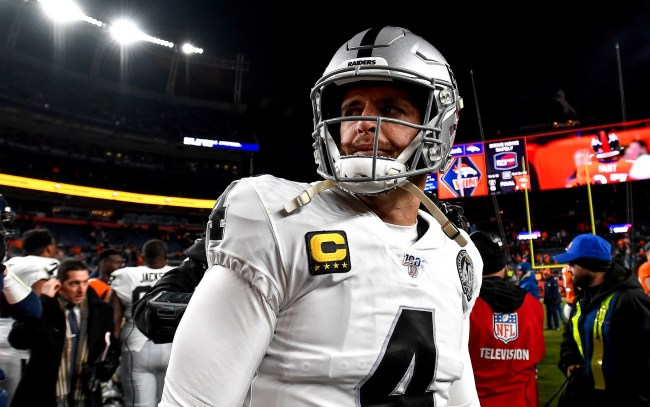 Rumors and speculation about where certain quarterbacks will be playing in 2020 have been all over the place. Fans and media have been hard at work trying to figure out where free agent quarterbacks like Dak Prescott, Drew Brees, Ryan Tannehill, Philip Rivers, Teddy Bridgewater, Marcus Mariota, Jamies Winston, and most importantly to many, Tom Brady will be plying their trade next season.

Brady, by far, has had his name attached to the most NFL teams in the rumor mill. The Bears, Browns, Chargers, Steelers, Cowboys, Panthers, Patriots, and Raiders have all been mentioned as possible destinations.

The Brady to the Raiders speculation was kicked into a higher gear when the 42-year-old legend was seen talking to Raiders owner Mark Davis at UFC 246.

When asked what he and Brady were discussing, Davis said with a wink, according to ESPN’s Paul Gutierrez, “Oh, that was about Tom was going to fight Pacquiao here to open the stadium.”

One person who appears to already be getting tired of the Brady to the Raiders talk is current Raiders quarterback Derek Carr.

During Wednesday’s ceremony to officially rename the team the “Las Vegas Raiders” at the team’s new Allegiant Stadium, Carr was asked about the rumors.

“I mean, there was a lot of quarterbacks at that fight,” Carr told Gutierrez. “And there was a lot of football players at that fight that are free agents. And it’s like, every time, with my job, it’s always a story. No matter what. And knowing some people that were around, I even know what the conversation was [between Davis and Brady], and it’s like, ‘C’mon, man, when’s it going to end?'”

“All of these things that [you’d think] everyone would be like, ‘Yes, we’re going the right way. Everything’s getting better, and we know where we need to add things and where we [need] help.’ You would think that that would be the story,” Carr added. “But that’s not how it works. And I understand that now.

“Especially when people are seen with certain people. It’s like, ‘Oh, gosh. Well, I was at dinner with [Davis] last night. Does that count for anything?’ Golly. It’s just funny. But I’m used to it now. But I’ll say it this way: I look forward to taking the first snap in that stadium, and I look forward to taking every snap from here on out — until I’m done.”

Man, if Carr is already tired of speculation about who will be QB for the Raiders in 2020, he’s really going to hate what Jason La Canfora wrote the other day.

Jon Gruden loves to gamble. He likes Derek Carr, but isn’t sure of high-end upside. He wants someone who is more willing to sling it downfield and make big plays. [Jameis] Winston just kinda looks like a Raiders QB, no? What a perfect fit for Vegas. Could you get him on a 2-3 year deal, kinda like a bridge situation, and also draft someone like Jordan Love? Probably. Gruden loves a challenge and coaxing the picks out of Winston certainly qualifies. This way he doesn’t mortgage his first round picks to move up for Tua or Burrow, gets a young starter, and can keep drafting weapons on offense.