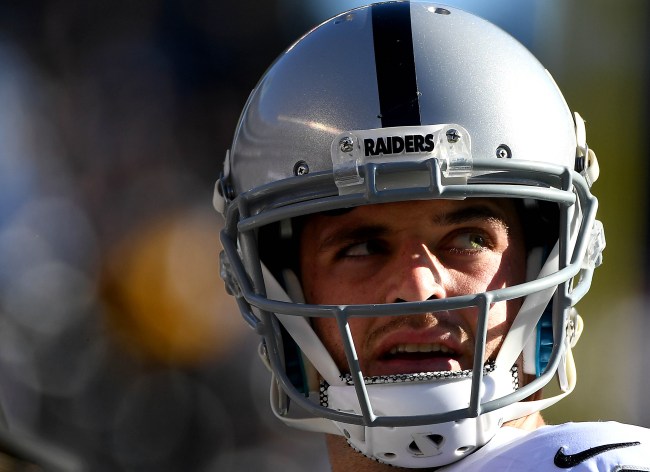 Poor Derek Carr. The dude had his MVP season derailed in the final week of the regular season (which also happened to be Christmas Eve) with a fibula injury, and now the dude is getting mocked on Twitter for supporting a child out there grindin’. Not to mention, he seems like an all-around good dude, with the rare ability to not let success get to his head after throwing for a mind-boggling 28 touchdowns for nearly 4,000 yards and only 6 picks. When it rains, it pours, man.

Saw that a 7 year old is collecting recyclables so he can pay for college.. has made 10k. Get off your tail and go work hard 4 what you want

I support the sentiment. Too many kids walking around with iPads when I had to wait until season year of high school to send texts to girls with my flip phone. AND IT WASN’T EVEN CAPABLE OF SENDING DICK PICS!!

Anyway, Twitter took Derek behind the woodshed with mostly funny quips, but some tight-assed people who legitimately got upset.

@derekcarrqb I too am pro-child labor

If you go to can boy's site it becomes clear that it's his parents' recycling business and Ryan is mostly a marketing tool.

@derekcarrqb 10K! Wow! He can pay for half a semester at a state school!

@derekcarrqb pretty cool. but it would be a lot cooler if college was affordable and 7-year-olds could just focus on being kids…

saw that a 10 year old has been selling his blood so he can afford a class trip to the aquarium. whats your excuse?

Just saw a 10 year old is gluing on a fake beard and walking in stilts to work as a longshoreman for lunch money. What's your excuse?

@derekcarrqb do you have brain damage?

@derekcarrqb poor people, rifle through garbage cans like a dog if you want college

@derekcarrqb That CTE in your fibula spread rather quickly. Get well soon.