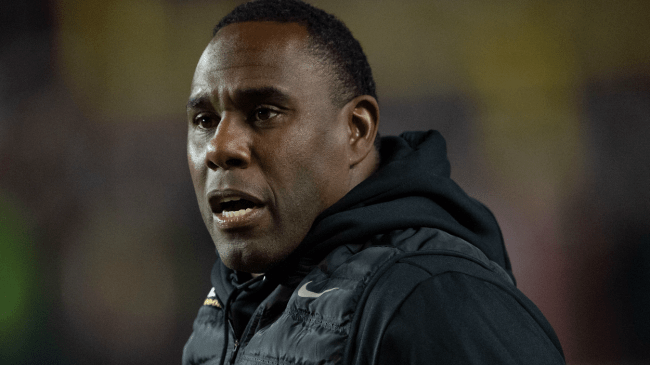 Derek Mason is stepping away from college football, announcing that he plans to take a sabbatical in the upcoming year. The news comes as a surprise to many as he just completed his first season at Oklahoma State.

Mason, who’s been a head coach in the SEC and a defensive coordinator at numerous stops, has been coaching for 30 consecutive seasons. He’ll now take a hiatus as he ponders his future.

And that future is on the minds of football fans around the nation.

While his tenure as head coach at Vanderbilt didn’t go as planned, he’s widely considered one of the top defensive minds in the sport. He led top ranking units at Stanford under both Jim Harbaugh and David Shaw. He’s also been coordinator at Auburn and now, OSU.

But after just one season in the Big 12, Derek Mason is handing in his resignation papers. That decision has many debating on the coach’s next step.

Oklahoma State DC Derek Mason said, after 30 consecutive seasons, he is going to take a sabbatical from coaching in college. He spent one season in Stillwater.

Some blame the Oklahoma State staff for the departure, zeroing in on head coach Mike Gundy.

One person wrote, “Mike Gundy broke this man. He escaped the [Bryan] Harsin disaster to run into the arms of Gundy.”

Others hinted that he may try to link back up with his old partner, David Shaw. Shaw has been interviewing for NFL jobs, and one would think that Mason could be a candidate for a defensive coordinator role.

The fan said, “Translation: My buddy David Shaw is going to hire me when he gets an NFL job and give me a big raise.”

Some, though, say it’s simply time for a break. One person hints that he went to Oklahoma State for a lighter workload after spending eight seasons in the SEC. He took a large pay cut to move from Auburn to Stillwater.

From what I’ve heard, Derek Mason was burned out but decided to give OSU a chance because of lighter workload Gundy allows his staff.

Time will tell what his next step ultimately is. Something tells me he won’t be away from the game for too long.