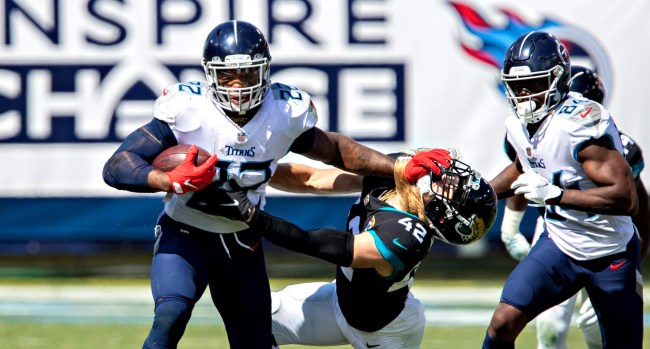 He has rumbled for 3,567 yards rushing and 33 touchdowns over the past two seasons.

He has not one, but two runs for touchdown of over 90 yards.

He is the only player in NFL history with at least 180 rushing yards in three consecutive games.

He is also the only player to ever have 2,000 yard rushing seasons in high school, college, and the NFL.

In other words, he is a bad, bad man when it comes to playing the game of football.

So, as if all of that wasn’t scary enough for NFL defenders (especially those little guys in the defensive backfield), then the offseason workout videos of King Henry that keep sprouting up on the internet will probably go the trick.

Then there is this…

Oh, and this, Henry’s latest mind-blowing feat of strength…

Is it any wonder Derrick Henry has the ability to stiff-arm tiny DBs to the moon?

Needless to say, folks on social media were more than a little impressed with Henry’s insane training regimen.

I would rather get tackled by prime Ray Lewis than trying to tackle a full speed Derrick Henry 😂. Wit Ray I’m a just fall to the ground lol. pic.twitter.com/RbAnPMzwzx

Derrick Henry was built in a lab. pic.twitter.com/ZRQR1ptPjq

Yeah so Derrick Henry is not human. What the hell is this?! 😂 pic.twitter.com/56WjidmrBD

And no neck pad? 😳 oh he got something to PROVE. https://t.co/hmGTUYA17e

This actually answers a lot of my Derrick Henry questions, tbh

“I couldn’t really speak on any other running backs (and what they do),” Henry told the media last August. “I was just doing what I do – me training, staying in shape, getting my body stronger and getting prepared for camp. It’s what I do every offseason.”

Gym’s closed, so @KingHenry_2 is putting in work in the parking lot 😤

“I really do drills (for) conditioning, to open up my lungs and make sure I am in shape,” Henry added. “That is really the focal point, to make sure my body is in shape. … I really looked to do some hill work, tried to find a good hill, a steep hill, and I found them when I was training in Dallas. I just wanted to get some hill work and see how in condition I was (in) and it was really some good work. … I liked it and I tried to do as much as I could when I had the time.”