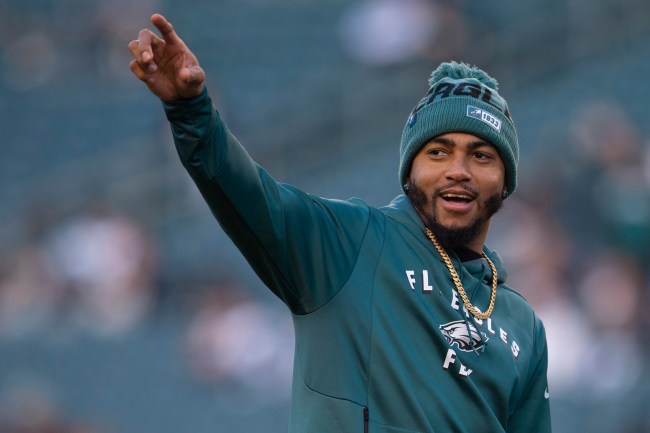 As the NFL continues to figure out what the regular season will look like due to the ongoing pandemic, DeSean Jackson of the Philadelphia Eagles has an idea that would only add even more intrigue to the games — assuming they’re played as scheduled this upcoming season.

The league, which has wrestled with the very real possibility of playing games without fans in the stands to help eliminate the spread of COVID-19, doesn’t have a great solution when it comes to replacing the energy and emotion of people in the stadium cheering on their favorite teams. It’s something that some players have openly talked about as being a factor in how they play, with DeSean Jackson recently echoing that sentiment by saying it’d be “culture shock” for the league to play in empty stadiums next season.

However, Jackson did offer up a pretty dope idea to try and replace the entertainment and noise fans bring to games.

Appearing on his teammate Lane Johnson’s Outside the Lane podcast, Jackson said he thinks every NFL player should be mic’d up during games, giving people on TV a unique view of what the game sounds like directly from the field. Here’s what DeSean had to say in support of the suggestion.

“I think they should [mike up players]. They should give fans the [insight] to see what really goes on between the white lines,” Jackson said on teammate Lane Johnson’s “Outside the Lane” podcast. “It gets crazy, bro. I know in the trenches it gets crazy. And I know on the outside it gets crazy, too, the conversations we go back and forth on.”

Given the amount of trash talk that inevitably goes on during an NFL game, DeSean Jackson’s idea would be more than welcome. Imagine hearing exactly what these guys say after a massive hit, or how players chirp throughout the game to get into an opponent’s head, or how a quarterback like Patrick Mahomes inspires his teammates for a comeback. It’d really be wild.

In addition to Jackson’s idea about players being mic’d up, because he voiced concern about the lack of energy in the stadium should fans not be allowed in, he also gave a cool idea that could get players pumped up in a very different way: a personal playlist to play while teams are on offense.

“Maybe if they could give us a playlist,” he said. “Each team has a playlist and each time you’re up on the ball, that’s what you’re hearing.”

Who knows what the NFL will decide to do — assuming fans aren’t in the stands if and when the season starts — but at least players like DeSean Jackson are out here giving some cool suggestions that enhance the viewing experience for people watching on TV if they can’t be in the stadiums. C’mon, Roger Goodell, it’s time to take some of these ideas and run with them.