DeSean Jackson Calls Donovan McNabb The ‘Cheapest Rich MF-er’ He Knows, Said He Had Major Issues With The QB 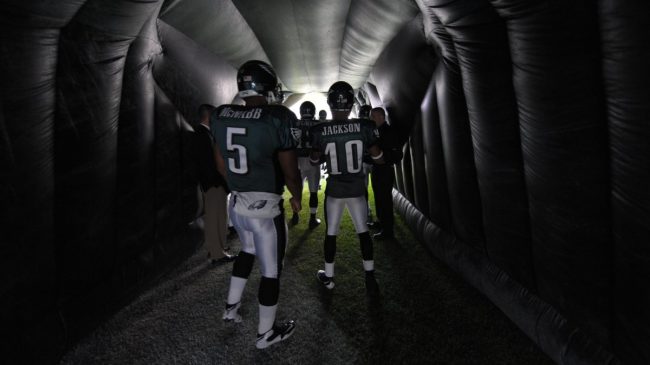 DeSean Jackson apparently didn’t get along with Donovan McNabb while the two were members of the Philadelphia Eagles.

The wideout was on the I Am Athlete podcast this week to discuss his time in the NFL, and one topic was his 2009 Pro Bowl season in Philly.

Apparently, McNabb wasn’t too happy that his teammate became the first player in NFL history to land Pro Bowl selections at two positions. While Jackson was a deadly threat on the outside, tallying an 1,100-yard season as a receiver, he was also a potent punt returner.

That year, he led the league in yards per return and punt return touchdowns.

According to Jackson, when the Pro Bowl results were made public, McNabb went to Michael Vick to say that he didn’t believe Jackson was deserving of the honors.

Of course, McNabb also landed a selection, in part due to the play of his star pass catcher.

This reportedly caused “major issues” between the two players, which not only occurred on the football field but also bled into their personal lives.

DeSean Jackson says Donovan McNabb was speaking to teammates behind his back in the locker, & told others “He didn’t deserve to be the first ever to make the Pro Bowl at 2 positions.

He also says McNabb charged him $25 admission to go to a party he threw. pic.twitter.com/ac5dH5zy44

While the two seemed to have issues on the field, those differences apparently flowed into their personal lives, too. Jackson says that McNabb once charged him $25 admission to get into a party he threw in Philly.

He went on to call the quarterback cheap.

“He was one of the cheapest, rich MF-ers you would know. He made me pay for everything.”

This particular incident came while McNabb was throwing a white party. He made Jackson buy tickets, which former teammate LeSean McCoy confirmed.

If true, it seems a little petty from McNabb, who was a multimillionaire at this point. Jackson, meanwhile, was still on his rookie contract.

McNabb would be traded the following season to Washington while Jackson remained in Philadelphia for another three years. The beef apparently has not gone away.