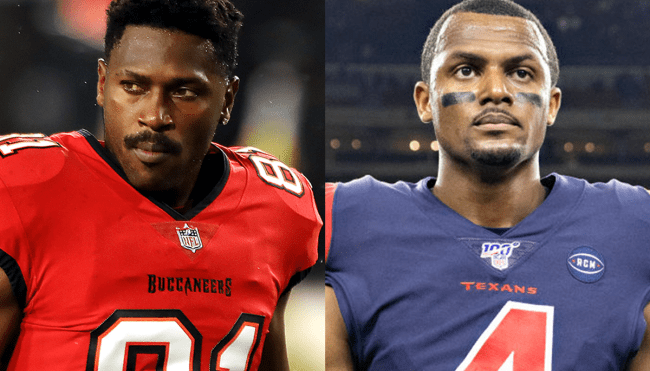 The perpetually underachieving Houston Texans are currently one of the most dysfunctional franchises in the NFL, so it was easy to understand why Deshaun Watson informed the team he wanted a change of scenery back in January and threatened to sit out next season if they declined to grant his wish.

As things currently stand, it does look like there is a very good chance the Texans will be without the services of Deshaun Watson when they kick off their next campaign—just not for the reasons either side anticipated when he initially issued his demand.

Last month, we learned Watson had been hit with a lawsuit filed by a high-profile Texas attorney Tony Buzbee, who posted a fairly cryptic message on Instagram in which he accused the quarterback of “behavior that we all know no one should put up with” following an encounter with a masseuse who said he “went too far” during a session.

It didn’t take long for other massage therapists who claimed they had a similar experience to come forward, which sparked a deluge of accusations. Shortly after, the lawyer revealed he’d been contacted by nine more women who accused the QB of sexual assault—a number that had ballooned to 22 just a few days after the first person came forward.

That marked the start of a saga that has continued to unfold over the past few weeks, as Watson’s business manager said his client was being blackmailed only for Buzbee to fire back by suggesting the quarterback essentially did the same thing with the NDAs he made the women the lawyer is representing sign in the wake of the alleged incidents.

Last week, the Houston Police Department revealed it had officially launched an investigation into the allegations, and on Tuesday, the NFL issued a statement confirming it was also looking into the matter shortly after the first accuser to go public broke down in tears while telling her story.

Only time will tell how things are going to play out, but there’s also no telling how much time it’s going to take—especially when you consider how the league handled similar accusations that were levied against Antonio Brown.

Shortly after Brown’s bizarre stint with the Raiders came to an unceremonious end, three women came forward to accuse Brown of a litany of offenses that resulted in the Patriots dropping the wide receiver from their roster. While the news broke in September of 2019, the NFL was in no rush to get to the bottom of things, as the league waited almost two months to speak with Brown as part of an investigation that didn’t come to an end until the last day of July, which is when Brown was hit with the eight-game suspension he served before making his return with the Buccaneers.

As a result, you have to wonder if the NFL will learn from history or if we’ll be doomed to endure yet another lengthy ordeal.

Despite the parallels between the two cases, it’s worth noting Brown found himself embroiled in even more legal trouble stemming from the erratic behavior he repeatedly showcased over that span, which may have played a role in the league dragging its feet as much as it did. With that said, if it took over ten months to ultimately resolve a situation that involved three accusers, it’s hard to imagine how long it could take to sort things out when over 20 women have come forward to accuse Watson.

The quarterback is obviously innocent until proven guilty, but you also have to imagine the number of women involved would make any potential legal proceedings where Watson could be convicted or cleared an incredibly lengthy ordeal. With that said, the NFL doesn’t have to abide by the same standards when it comes to doling out punishment, as it could easily lay down the law if it determines even one of his accusers is telling the truth.

Either way, it’s very hard to imagine Watson will be taking the field when the season kicks off based on the evidence at hand. It’s also hard to imagine any team would want to add him to their roster if the situation somehow isn’t resolved by then, but with that said, it wouldn’t be the first time a franchise has been more than happy to turn a blind eye to a player’s controversies off of the field in order to harness their skills on it.