Deshaun Watson Responds To Report Of 66 Masseuses, Says He Should Be Believed: Fans React 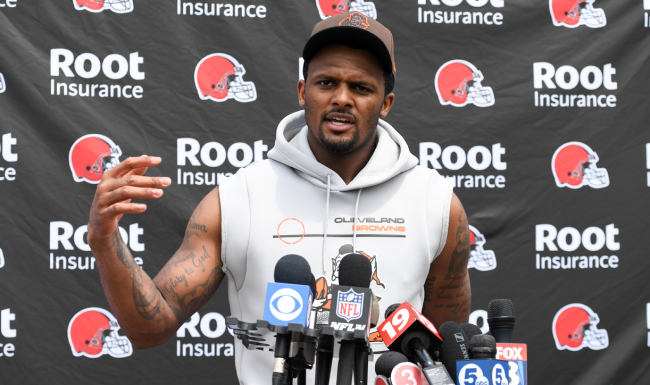 On Monday, it was revealed by attorney Tony Buzbee that two more women are in the process of filing lawsuits against Cleveland Browns quarterback Deshaun Watson, bringing the total to 26.

On Tuesday, Deshaun Watson addressed the media and was asked to respond to several of the allegations that have been made against him by those women as well as a New York Times report which stated he received massages from at least 66 women over a 17 month time period.

“Honestly, it’s been tough,” Watson began. “Just trying to make sure that I stay balanced with my mental and my social life, but I have a great family, great legal team and I have a great support cast here in this organization so when I walk into the building all that stuff is outside.”

Watson was then asked if the number of lawsuits against him continuing to increase is surprising to him.

“I go each and every day focusing on my task and being the best person I can be,” he replied. “I can’t control what the other side is doing with the legal process, but, like I said before, I just got to continue to focus on being the best Deshaun Watson I can be for this organization.”

He also spoke out his meeting with the NFL and said, “I answered every question truthfully.”

When asked why a jury should believe him, should these lawsuits go to trial, over the 26 women who have made accusations against him.

Watson replied, “I understand that question and I definitely respect it, but with this environment, coming off the football field, it’s hard to answer that question, especially without talking to anybody on my legal team.

“But at the same time, I’ve been honest and I’ve been truthful with my stance, I never forced anyone, I never assaulted anyone.”

Another reporter asked Watson about the New York Times report and whether the number of masseuses he used, 66, was correct.

“I don’t think so, from what me and my attorneys went through,” Watson replied. “At the same time that’s more of a legal question that I can’t really get into details about. So you’d probably have to ask my attorneys and things like that to confirm.”

Many NFL fans were left feeling skeptical after hearing what Watson had to say on Tuesday.

Yeah that wasn’t a good answer on his part 😂

soo.... beleive him because he says so and has an honest face? pretty uninspired answer to a softball question

The Cap is insurmountable

Someone should ask him how he defines assault.

Bruh lost count it been too many

Good lord if this isn’t the most Browns thing ever then Idk what is.