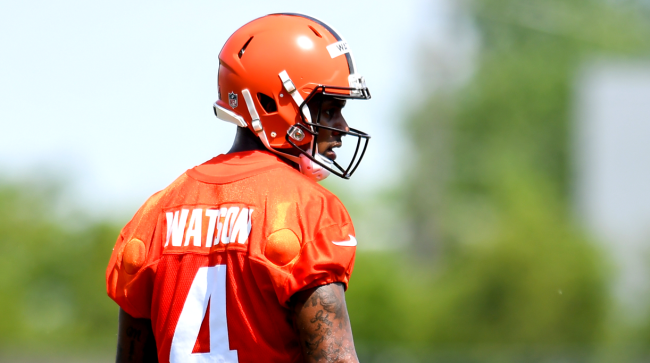 Attorney Tony Buzbee revealed on Monday that two more women are in the process of filing lawsuits against Cleveland Browns quarterback Deshaun Watson, bringing the total to 26.

The two new lawsuits were added to the list after one woman was referred to Buzbee by a lawyer in Atlanta and the other deciding to come forward after two women spoke out on Real Sports with Bryant Gumbel last month.

“We have vetted other calls but haven’t yet made decisions on any further filings and will continue to do our due diligence consistent with our ethical obligations. With regard to any impending filings, we will allow the facts of the cases to speak for themselves,” Buzbee told News 5 Cleveland.

Last week, a 24th woman filed a lawsuit against Watson and in it made numerous disturbing claims against the NFL star, according to Sports Illustrated which obtained a copy of the suit.

“Watson reached out to Plaintiff a few days later to schedule a second massage. Plaintiff agreed. The second massage session took place on August 9, 2020 at Plaintiff’s apartment, at around 3:00 pm or 4:00 pm in the afternoon. At the beginning of the session, Watson did not want to use the draping that is typically used in a massage. Instead, he requested a small towel. Watson also insisted on starting the massage with him lying face up. Watson reminded Plaintiff he only wanted her to focus on his upper body and abdomen. He then demanded that she work on his inner thighs and quadriceps. During the massage, Watson’s tone became aggressive as he repeatedly demanded that she go higher and higher into his inner thighs, causing her hand to touch his scrotum. As the massage continued, Watson made piercing eye contact with Plaintiff. At this point, Plaintiff became very uncomfortable with the situation. She was also scared, because Watson was in her apartment, and he was much bigger and stronger than the Plaintiff: She also did not want to upset Watson for fear of retaliation against her small business. As Plaintiff attempted to focus on getting the massage completed, at some point, Watson got an erection, causing the towel to fall off: By this point, Watson, was now completely naked and exposed. Watson then started to masturbate. Plaintiff immediately stopped the massage. Apparently responding to look of shock on Plaintiff’s face. Watson said to Plaintiff, ‘Relax. It is okay to touch it.’ Plaintiff refused Watson’s entreaties. Watson then stood up and continued masturbating more aggressively. As he did so, Watson asked the Plaintiff ‘Where do you want me to put it?’ Plaintiff by this point was in complete shock and could not speak. She froze. Watson quickly ejaculated; some of his ejaculate got on Plaintiff’s chest and face. Plaintiff immediately left the room, and ran into the bathroom to clean Watson’s ejaculate off’ of her. Watson offered no apology or explanation for his conduct. He instead got dressed, paid Plaintiff $150 via Cash App and left. Plaintiff was left humiliated and traumatized shortly after the massage, Plaintiff called her close friend to tell her what happened. They both were mortified by Watson’s conduct. There were no further massage sessions. She shortly thereafter quit massage therapy.”

The New York Times reported last week that Watson received massages from at least 66 women over a 17 month period.

Browns assistant wide receivers coach Callie Brownson said last Wednesday that she and other female employees were consulted before the team signed Watson to a monster contract.

“We had a lot of really healthy conversations and I appreciated that,” Brownson told the Akron Beacon Journal. “I definitely felt like they cared about the opinions of the women in this organization.

“It was not neglected; it was not overlooked. They definitely spoke to those who would be involved in the organization to see what that meant.”

The Browns, despite all of the allegations and lawsuits against Watson, are reportedly still “all-in” on the QB.

Reactions to this latest news about two more lawsuits being filed against Deshaun Watson show many fans want the NFL to come to some sort of resolution on Watson’s status for the 2022 season.

Buzbee forcing NFL’s hand to bring the hammer down. There will be more. Book it. pic.twitter.com/N3q3zm9eHm

When will it end?

Get this guy out of the league and fast.

Hard to make a decision because new details keep being released, what a mess

The NFL is still investigating according to them. They are still conducting interviews. A couple reporters have said a suspension is expected in July. The suspension won't even go into effect until week 1 at the earliest so it isn't like they need to make an announcement now.