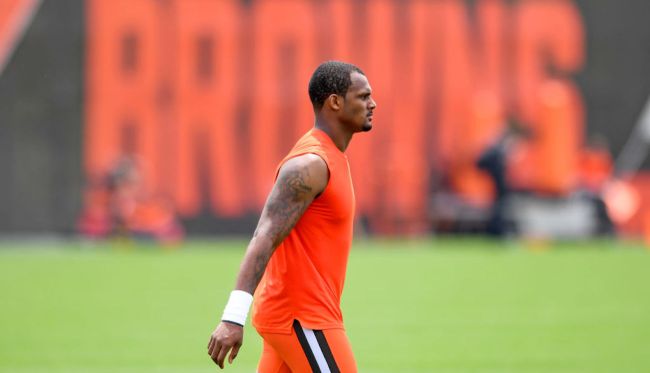 Despite the bombshell New York Times report that embattled Cleveland Browns quarterback Deshaun Watson allegedly met with 66 massage therapists over the course of 17 months and the ongoing civil suit from 24 women alleging sexual misconduct, the organization is reportedly still “all in” on their $230 million man.

According to a new report from the Cleveland Plain Dealer, the Browns — who traded for the 26-year-old Watson this offseason despite the years-long controversy surrounding him — remain committed to the former Texans signal-caller and that “nothing has transpired since he signed the deal in March that has caused the Browns to change their view of Watson or to have them contemplating trying to get out of the groundbreaking contract.”

The Cleveland Browns are reportedly still “all in” on Deshaun Watson

Furthermore, sources say “nothing has taken place that has the Browns pondering trying to void the blockbuster trade with the Texans,” including the recent 23rd and 24th lawsuits that were filed in recent weeks.

The fact that the Browns still have unwavering support of Watson has been articulated by the team to Watson’s lawyer, Rusty Hardin.

“The Browns and all of us that know Deshaun are still totally behind him,. These latest claims by [plaintiffs’ attorney Tony] Buzbee change nothing, and they are totally false, and that will ultimately be what everyone concludes when they hear the evidence.’’ [via Cleveland Plain Dealer]

In addition to the recent new suits against Watson, the Houston Texans were also officially named as a defendant in the lawsuit for allegedly enabling Watson’s alleged behavior. The new developments have also called the NFL to predictably backtrack on their previous indications that their investigation into Watson was coming to a close.

RELATED: The NFL Is Backtracking On Saying The Desaun Watson Investigation Was Coming To A Close As New Accusations Surface