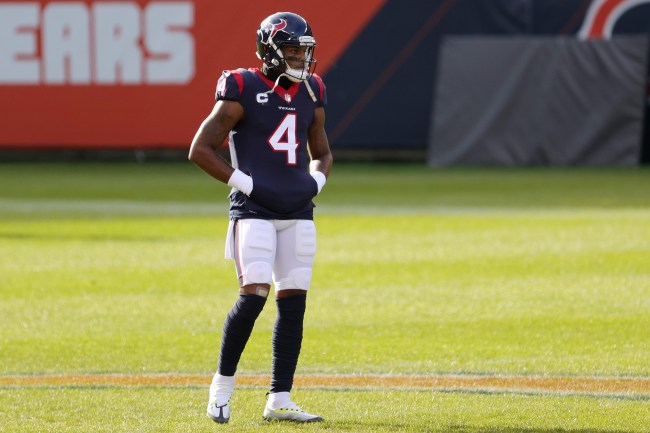 At this very moment, there are a ton of Deshaun Watson trade rumors floating around, with new reports popping up pretty much every day about where the superstar quarterback could possibly end up. Last I checked, the quarterback is all but done with the Houston Texans, and is reportedly positioning himself to force a trade sometime this offseason after the team’s front office ignored Watson’s request to be included in the hiring of a new general manager and head coach.

While the Texans signed Watson to a four-year extension in 2020 worth $160 million, the team struggled this season, winning just four games and seeing a whole bunch of dysfunction occur along the way. And now that the Pro Bowler feels disrespected by the franchise, he’s trying to use his weight to force a trade. Sounds about right — after all, it’s a business.

But will one actually happen?

We don’t yet know the answer to that question, but, as mentioned above, every single day brings new Deshaun Watson trade rumors. And, on Monday, longtime NFL reporter Ian Rapoport added another little wrinkle into the mix, suggesting that a darkhorse team could be interested in acquiring the talented signal-caller: The Carolina Panthers.

Appearing on Good Morning Football, Rapoport listed a couple usual suspects who are believed to be linked to Watson. That list includes the likes of the New York Jets, Miami Dolphins and, depending on who you ask, possibly the Jacksonville Jaguars — but that’s a long shot. Rapoport also added the Panthers, though, explaining how Carolina could get a deal done with Houston to acquire the quarterback.

From @GMFB: #Texans QB Deshaun Watson has not asked for a trade and the team hasn’t said they’ll trade him… but teams are calling, anyway. The #Jets and #Dolphins have been discussed publicly, but don’t dismiss the #Panthers being in the mix. pic.twitter.com/g09zWZI1iM

This is all good fodder and all, but, let’s be very clear about this: The Houston Texans’ leadership have denied any reports about a Deshaun Watson trade. Also, the player hasn’t formally asked to be dealt, he’s just sent a couple cryptic tweets. That’s expected for a number of reasons — because it’s a good PR move for both sides, the team doesn’t want to show their hand should they actually be listening to offers, and because, deep down, the Texans absolutely want to keep their franchise quarterback.

However, if the right offer comes along and the Texans know Watson really doesn’t want to play with them any longer after feeling disrespected this offseason, every sports fan knows a deal will get done. As shocking (and stupid) as it would be to see a 25-year-old superstar get shipped out of town, we’ve seen crazy things like this happen in sports all the time.

My guess? Even with all the chatter from the Texans’ front office about standing their ground and not dealing Deshaun Watson, here’s to betting the dude gets shipped out of town. There’s already rumblings that J.J. Watt could be traded, and with little draft capital to quickly upgrade the roster, Houston is pretty much in rebuild mode. Dealing Watson to clear some cap space, acquire draft assets and commit to rebuilding is the only way to go here.