I’m Not Sure What To Make Of Bart Scott’s Suggestion To Jaguars About Trading No. 1 Overall Pick For Deshaun Watson 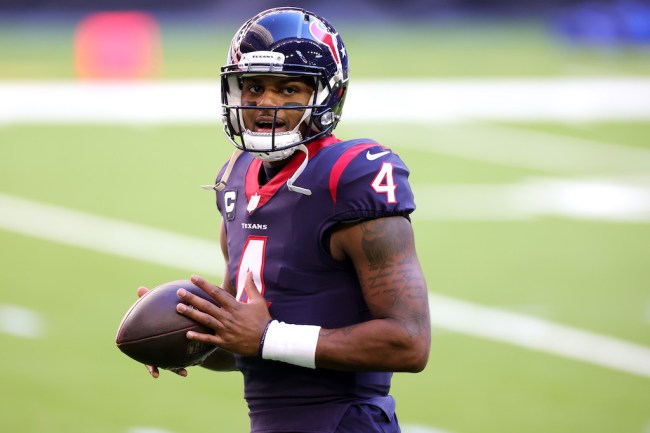 Rumors keep flying that Deshaun Watson is unhappy with what’s going on inside the Houston Texans’ front office. After winning just four games this NFL season — which led to teammate J.J. Watt even apologizing to the quarterback for wasting one of his seasons — the franchise is looking for a new head coach now, which is something Watson wanted to be involved with. Unfortunately, the team has totally messed up the process, and, along the way, have made their franchise signal-caller a little pissed off.

Given Watson’s relationship with the Texans is rocky at the moment, could the team actually trade the former first-rounder? After signing a four-year extension in 2020, some believe the team could try to recoup some draft assets lost over the years from bad trades executed by Bill O’Brien, the team’s former head coach and GM.

Sure, it’s a long shot to think Deshaun Watson will be shipped out of town, especially after his impressive 2020 campaign that saw him lead the league in passing yards, but, hey, anything’s possible. One possible destination for the quarterback? According to ESPN analyst Bart Scott, it could be the Jacksonville Jaguars.

Appearing on Get Up Friday morning, the former NFL linebacker suggests the Jags — who just hired Urban Meyer as head coach — should kickstart the new era by trading the No. 1 overall pick for Watson. It’d give the Texans a chance to draft Trevor Lawrence out of Clemson and start the rebuild with a rookie under center. Take a listen to Scott’s idea below.

.@BartScott57 believes the Jacksonville Jaguars should consider trading the No. 1 overall pick for Deshaun Watson. pic.twitter.com/FVcjYf2dNh

Now, I’m usually not somebody with a loss for words, but… man, this take from Bart Scott really got me. Like, is it a good idea? Is it an idiotic idea? Is it actually something that could be possible? Considering both the Texans and Jags play in the AFC South, it’d seem like there’s no chance Deshaun Watson gets traded within the division. Then again, crazier things have happened.

It appears I’m not the only one who’s not sure what to make of Scott’s take, because people on Twitter had mixed opinions about the analyst’s thoughts on the topic.

Ur right about the pay but “way higher ceiling “ unmmm naw

Maybe one of them regrets it down the road, but their job is to do what’s best for their team. Both do here:

– Houston, while losing their franchise QB, gets the best QB prospect in recent memory

Jaguars are much closer than the Texans with 11 picks in the draft and an okay core. They aren’t a 1 win team. They weren’t healthy and legit tanked.

How is @BartScott57 even allowed to be on tv with these awful takes?

Trust me, there are way worse takes than this one from Bart Scott. But, for some reason, it’s hard for me (and plenty of others) to decide if it’s smart or stupid to even suggest the Texans trade Deshaun Watson to a division rival. Who knows how this all plays out, but in my personal opinion, Houston has to move on from their quarterback and start rebuilding. It might not make sense to do business with Jacksonville, but if the New York Jets come calling and offer the No. 2 overall pick and a few other assets, that’s something that needs to seriously be discussed — because he deserves a fresh start if he doesn’t think the Texans can win now.