J.J. Watt Actually Apologized To Deshaun Watson For Wasting One Of His Years During Awful Texans Season 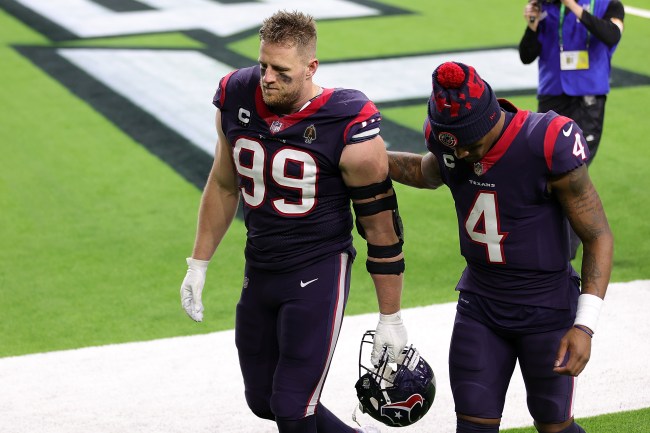 Just how awful were the Houston Texans this NFL season? Bad enough that star defender J.J. Watt felt obligated to apologize to superstar quarterback Deshaun Watson following the team’s embarrassing loss against the Titans in Week 17, with the bullish defensive end telling the playmaking signal-caller he was sorry for wasting one of his years. Yikes.

The video, which can be seen below, shows the two dejected Pro Bowlers walking off the field for the final time during the 2020 NFL season, with Watt offering up sympathy to Watson for the team not living up to expectations. Hell, J.J. Watt even added that he thinks the Texans should’ve had 11 wins — which, presumably, would’ve put them into the NFL playoffs.

As the tweet above from Dov Kleiman states, Deshaun Watson led the league in passing during the 2020 NFL season, finishing with more than 4,800 yards through the air, 444 more on the ground, and having a 33-7 touchdown-to-interception rate. Had the Texans been competitive and earned a spot in the NFL Playoffs, the four-year quarterback may have received legit MVP consideration. Unfortunately, as it stands, he, J.J. Watt and the rest of the Texans are searching for a new head coach and general manager.

Who knows what lies ahead for the Houston organization this offseason, but changes are obviously coming. After locking up Watson to a big extension worth $160 million over four years in 2020, J.J. Watt’s future with the franchise hangs in the balance. Following the Texans loss, the three-time NFL Defensive Player of the Year sounded as if this was it for him in Houston.

JJ Watt talks about the possibility that this was his last game with the #Texans. pic.twitter.com/FFpcsBdHZl

Without a bunch of draft capital, salary cap space or any semblance of direction as the team searches for new leadership both on the field and in the front office, Watt was right about the Texans wasting one of Watson’s years — and, sadly, the next couple ones might be just as painful. Like the rest of us, these two will be watching the NFL Playoffs from their couch.