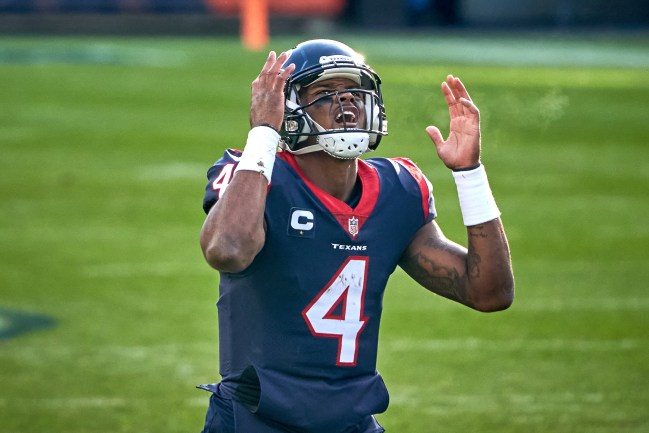 Man, what a major fall from grace for the Houston Texans, huh? After reaching the NFL Playoffs in four of the past five seasons, the franchise absolutely bottomed out this year, not only firing head coach-general manager Bill O’Brien midway through the season, but finishing with a 4-12 record even after the coaching change. Making matters worse? The team traded away a bunch of its draft assets, so Houston doesn’t even have a high first-round pick in the NFL Draft as a “reward” for sucking so bad.

Yes, indeed, Houston has a problem.

As if that’s all not enough misery for one team, the Texans now find themselves making headlines for being a bit dysfunctional. According to reports, the team ignored outside consultant recommendations for its head coaching search, and, in doing so, really turned off superstar quarterback Deshaun Watson.

Things between Watson and the Texans have gotten messy AF, with reports claiming the three-time Pro Bowler isn’t even answering calls from the front office. Considering the signal-caller signed a four-year, $160 million extension in 2020, it’s clear that the 25-year-old’s the face of the franchise. Unfortunately, the organization is messing this whole thing up.

With all that’s going on with the Texans, two of the team’s all-time greats just had to weigh in, with Andre Johnson and Arian Foster taking to Twitter to voice their displeasure with the organization, all while encouraging Deshaun Watson to stand his ground. Take a look below at what the former Pro Bowlers had to say.

If I’m @deshaunwatson I will stand my ground. The Texans organization is known for wasting players careers. Since Jack Easterby has walk into the building nothing good has happened in/for the organization and for some reason someone can’t seem to see what’s going on. Pathetic!!!

Look, the Texans are free to run their franchise however the hell they want to, but there will be consequences when alienating star players. All Watson reportedly wanted was to have a say in some of the big decisions surrounding the new general manager and head coach. Considering he pledged commitment by signing that big deal last year, it’s the least Houston could do to make sure he’s on board. If he’s not, he has the right to ask for a trade because the state of the organization may seem different than it did when he agreed to the new deal.

The fact that former Texans players are chiming in on all of this is a bad look. From Johnson slamming the franchise for being known to waste players’ careers, to Foster agreeing that the situation must be a mess for the former wideout to be so upset, it’s all a major stain on the Houston franchise. In fact, Johnson’s so riled up about this whole thing for Watson that it’s the first time since April 2019 that he posted something other than a Crown Royal ad on his Twitter feed.

Prior to today, Andre Johnson's last tweet that wasn't an ad for Crown Royal was from April 2019.

Who knows how this all ends, but if the reports are true that Deshaun Watson is ignoring his bosses, that’s clearly a bad sign. Sure, the Texans have the quarterback locked up after that extension last season, but the star player has some leverage as well, and could very well force his way out of Houston before next NFL season.

We knew the NFL Playoffs were going to bring lots of drama, but who would have ever thought that most of it would come from a team currently watching the games from their couch? It’s time for Houston to slow down, communicate with its young star and figure out how to right this ship, because, currently, the damn thing’s sinking fast.