Texans Don’t See Tua Tagovailoa As An ‘Adequate Replacement’ For Deshaun Watson, Are Reportedly More Likely To Draft A Quarterback 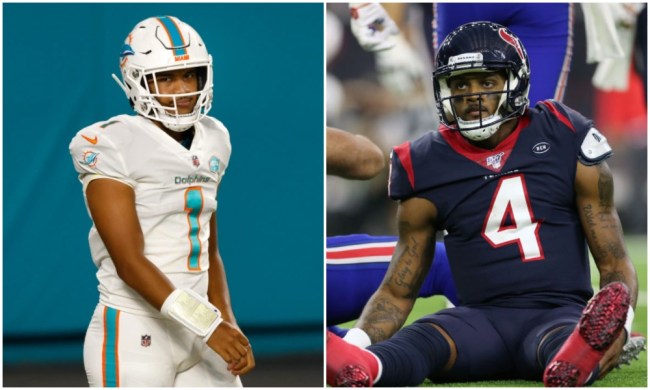 The rumors involving the Texans trading away Deshaun Watson continue to grow day after day. The relationship between Watson and the franchise appears to be in a dark, dark place, and based on a number of reports, it seems like it’s only a matter of time before the Texans ship Watson to a new team.

While almost every team around the league would ship away their current quarterback in exchange for Watson, only a handful of teams actually have the pieces to put together a package Houston will even consider looking at.

One team that’s been in the middle of the Watson trade rumors is the Miami Dolphins. The idea of the Dolphins creating a trade package centered around Tua Tagovailoa has been floated out there, but based on a recent report from Aaron Wilson of the Houston Chronicle, there may not be much juice behind that possible scenario.

Houston reportedly doesn’t see Tagovailoa as a legitimate, plug and play right away replacement for Watson. Instead, the Texans could look at drafting a quarterback to replace Watson if they do elect to trade him away.

Miami has a quarterback with upside in Tua Tagovailoa, but that could be a deal-breaker for the Texans. Tagovailoa, a former Alabama standout who had his moments during his rookie season, isn’t regarded as a quarterback the Texans will view as an adequate replacement for Watson, according to multiple league sources.

The Texans are considered far more likely to draft a quarterback, someone like Ohio State’s Justin Fields or BYU’s Zach Wilson, to replace Watson than swap him out for Tagovailoa.

Right now, Tua isn’t anywhere close to being the quarterback Watson is. While the former Alabama star could be the next Watson, he’s not right now and honestly hasn’t shown enough for anyone to truly think he’ll turn into that type of player. In the ‘what have you done for me lately’ NFL, swapping Watson, who led the league in passing this past season, for a second-year player with plenty of question marks around him doesn’t seem like it would be the most beneficial move for Houston to make.

Then again, Tua wouldn’t be the only piece of the puzzle on a possible deal. Trading away Watson is a risk for the Texans no matter the return, that’s how great he is.