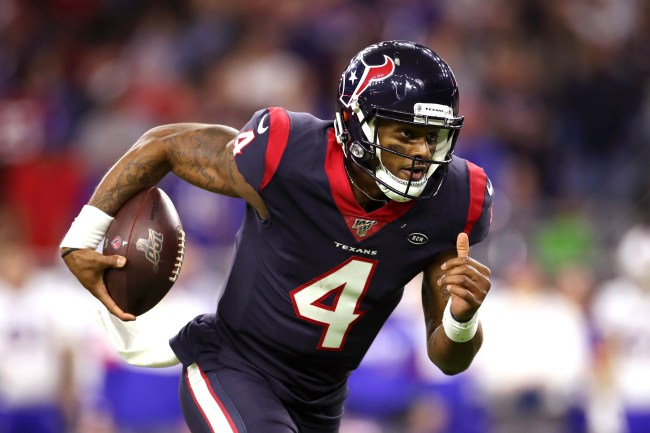 Deshaun Watson’s agent David Mulughetta stirred the pot with his social media activity amid all the behind the scenes drama that is going on between his client and the Texans.

Earlier this week, it was reported that the Texans franchise QB was “extremely upset” with not being consulted in the team’s hiring of new GM Nick Caserio despite the fact that owner Cal McNair had promised that he would listen to Watson’s suggestions.

Deshaun Watson has not spoken to #Texans brass in the last few days, though they have tried to call him. https://t.co/6ObYHqrdgB

NFL Network Insider Ian Rapoport reported Thursday that the multi-time Pro Bowler is “extremely unhappy” with the organization regarding his lack of involvement in and the process that led to the team’s decision to hire GM Nick Caserio this week.

Texans owner Cal McNair previously informed Watson he would be involved in the process and be asked to provide feedback during the team’s search for a GM and head coach, but that has not happened to this point, Rapoport noted.

For Watson, the displeasure does not stem from the actual hiring of Caserio, but his lack of involvement. Rapoport noted that Watson wanted the organization to at least listen to his voice, as well as the locker room’s, and also give him the opportunity to meet with candidates.

While McNair introduced Caserio to the media as the team’s new GM, Mulugheta posted a cryptic tweet that many felt was a shot at the Texans’ owner who inherited the team from his father.

Deshaun Watson’s agent deleted this tweet, a tweet he posted just as Cal McNair, the owner of the #Texans, a team he inherited from his father, has a press conference introducing his new GM hire that was hired because he was a friend of a friend. pic.twitter.com/UJx2zbGd0m

Mulughetta deleted the tweet and immediately denied that it was about Texans owner Cal McNair.

Haha actually a reference to politics this time. Everything isn’t about football guys… but hey whatever gets clicks I guess.

Watson's agent deleted the tweet, which referred to nepotism being at an all-time high. He will now claim he wasn't talking about the Texans but I don't think there's any doubt that Watson and his camp are not happy with the team right now. pic.twitter.com/DmAMlI23qJ