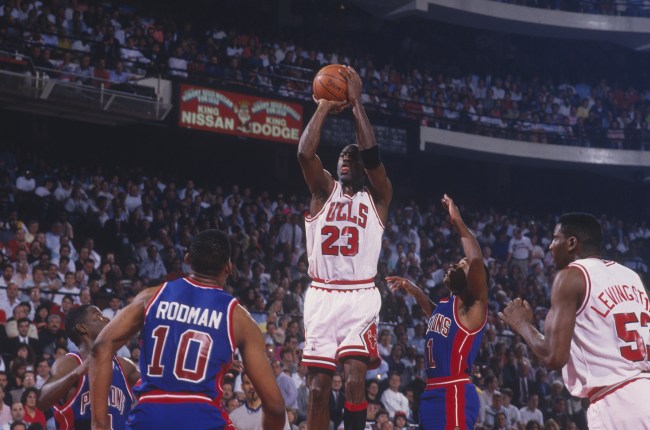 Focus on Sport via Getty Images

Sometimes I have to remind myself that for a significant stretch of time, the Detroit Pistons owned MJ and the Bulls.

If the entire Pistons franchise in the late 80s/early 90s wasn’t so punchable, maybe Isiah Thomas would be a Dream Teamer and society wouldn’t tacitly view the Bad Boys’ back-to-back ships as a footnote in the Bulls saga.

And, in true Jordan fashion, he has found a roundabout way to humiliate his rivals three decades later.

On Tuesday, Nike announced that all 30 NBA teams (Pistons included!) will rock the “Jumpman” logo on their alternate uniforms.

(It also doesn’t help that the current Pistons jerseys are capital T Trash.)

Is it a coincidence that the Pistons picked their worst jersey ever to put the Jordan logo on? I think not.

Pistons fans are beside themselves.

The brutal irony of sporting the emblem of the man who squeezed the life out of your franchise was not lost on the rest of the NBA world either.

When members of the Bad Boy Pistons see the new Detroit City Edition jerseys with a jumpman on them pic.twitter.com/9dKpteXFjW

MJ seeing his logo on a Pistons jersey pic.twitter.com/8flzL1JHWE

Jordan when Bill Laimbeer goes on ESPN to complain about the Jumpman logo being on Pistons Jerseys pic.twitter.com/rqFftMJ2RK

Michael Jordan having the Pistons print his logo on their jerseys is Keyser Soze-level vengeance https://t.co/1ytWtqzTB3

Entire Pistons fan base when seeing Jordan logo on their jerseys: https://t.co/uc1RPD6qwG pic.twitter.com/2Yx9Jc76Ye

MJ seeing the Jumpman logo on the Pistons jersey for the first time pic.twitter.com/fd5T9YJuiG

when MJ sees the Jumpman logo on a Pistons jersey pic.twitter.com/RmxOOFmetP

If it’s any comfort to you Pistons fans, at least you have an entire bubble season and off-season to process this hurtful information.