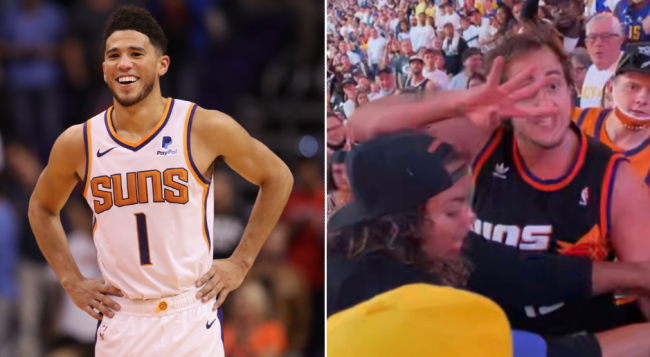 Devin Booker has issued a response to people criticizing him for giving ticket to the Suns fan who was seen fighting Nuggets fans in a viral video.

Last week, Nick McKellar became an Internet sensation after he was seen beating down two Nuggets fans while yelling “Suns in 4.”

McKellar went on to claim that he was only acting in self-defense which was corroborated by a longer video that shows the Nuggets fans pouring beer on his head.

Booker saw the video and immediately tracked down McKellar to gift him some free tickets to the Western Conference finals.

Apparently, some people weren’t happy that Booker was rewarding the “Suns in 4” guy for fighting.

Giving the ‘Suns in 4’ guy tickets and a signed jersey sets a bad precedent https://t.co/vUkUMyvypl pic.twitter.com/a436SbkMfO

While speaking to the media on Saturday, Booker responded to the critics by saying he felt McKellar “had no wrong intention” and was forced into the situation by the two Nuggets fans.

“I just said what’s up. I watched the whole video. I didn’t expect it to turn out to everything it is but he’s gonna be in the house, he’s gonna be at the game. We’re looking forward to it. He’s highly spirited for this team.”

“You can go down the line and say if it was self-defense or not. I know that’s what everybody wants to hear but if you watch the full video I think he’s a pretty wholesome guy that had no wrong intention and was forced to be put in that situation.