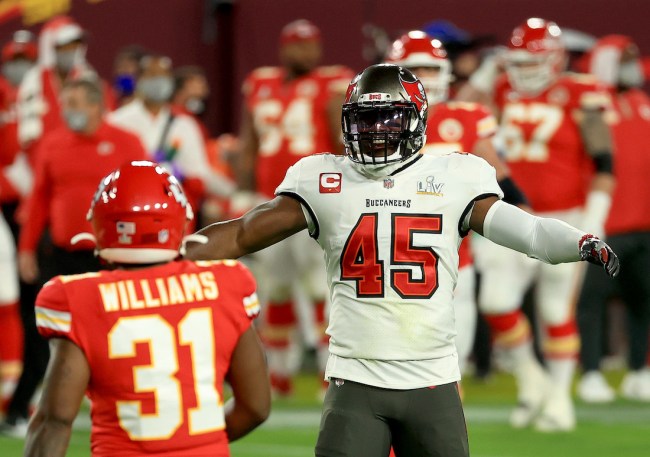 Anyone who watched Super Bowl 55 saw a Buccaneers defense led by Devin White that absolutely dominated the Chiefs. In the previous 53 career NFL games Patrick Mahomes had started for Kansas City, no one had ever seen him struggle like he did during the Big Game, with his one memorable moment being a remarkable sideways pass that fell incomplete. Yep, that’s the kind of day it was for the Chiefs.

While Tampa Bay’s defense was suffocating and had Mahomes running around the backfield looking like a chicken with his head cutoff to try and extend plays, the Buccaneers may have had a little extra inspiration for playing so bullying. According to Devin White, who appeared on FS1’s Undisputed Wednesday morning, that motivation came from the Chiefs’ cockiness, with talk of the K.C. defense being unstoppable prior to the game kicking off.

But White and his comrades quickly shut that talk down, with Tampa Bay’s defense focusing on attacking the Chiefs’ makeshift offensive line during Super Bowl 55. Here’w what the linebacker had to say during his appearance on Undisputed about his team’s mindset.

“We knew that they were going to be a cocky team, which they have every right to be. They had the No. 1 offense in the entire National Football League. But we knew they couldn’t block us. We knew that our front four was going to dominate them. They did us a favor. They played right into our hands,” White said.

Some more gems from Devin White: They started gaining yards when we were already up 21 points, we already gave our little brothers the controllers. We know what went on, there was a lot of toe tagging out there.pic.twitter.com/7UYRpBtfFq

You’ve got to love Devin White for still punking out the Chiefs even after capturing the Super Bowl 55 title. Some may say it’s bad sportsmanship, but, you know what, when you’re on top of the mountain, you can gloat a little bit — especially when we all saw the Buccaneers defense make Patrick Mahomes and his offense look… human. With that type of performance, it’s totally OK for the linebacker to brag about doing something pretty much nobody else in the NFL had done to that point.

As for the chatter and/or excuse about Kansas City’s offensive line being hobbled, nobody wants to hear the excuse. The Chiefs have some of the most lethal offensive weapons in the league — like Tyreek Hill and Travis Kelce, among others — so White’s right in saying that the Chiefs could’ve adjusted to draw up quicker options to their playmakers. They didn’t, and, in the end, they got embarrassed.

It’s one thing to be humbled on the grand stage of the Super Bowl, which the Chiefs were. It’s another thing to head into the contest a little cocky and then lay an egg, which Kansas City also did. Whether it was overconfidence on their part, or just being overmatched by the Buccaneers’ defense, Devin White’s here to keep the trash-talk going all offseason long.