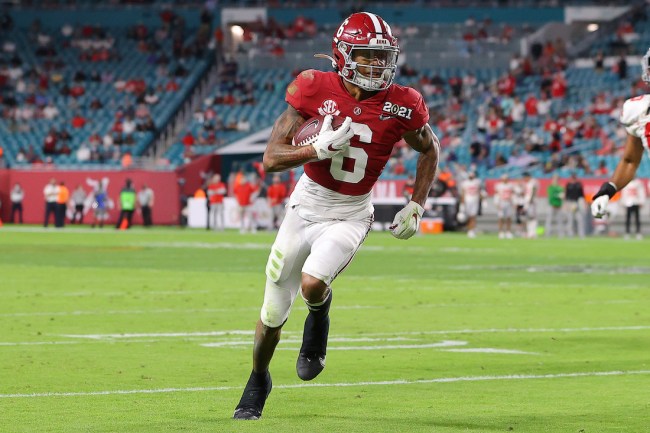 The NFL might be a completely different animal than college football, but DeVonta Smith proved during his time with the Alabama Crimson Tide that he’s a pretty damn good player — despite his pint-sized frame. Not only did the wideout go off during the 2020 season, leading to a Heisman Trophy victory, but he set more than seven school receiving records in his four years in Tuscaloosa, further showing how big of a stud he is.

Despite all of that, questions continue to linger about Smith’s size leading up to the NFL Draft, with scouts and other media members wondering if his 6’1″, 175-pound frame is capable of withstanding the speed and the pounding of the NFL. And because the draft’s the ideal time to make comparisons, some are wondering if the former Bama wide receiver is destined to flop at the next level due to his small frame.

There are 16 WRs that weighed in at 170 pounds or less at the combine since 2000. Here's the top guys sorted by career AV. DeSean Jackson is best case scenario, who ran a 4.35. I like Smith a lot, and think he will be a good pro, but it would be a bit unprecedented. pic.twitter.com/lDAWRHuEjm

With all due respect to those 11 guys on the list above, DeVonta Smith is on another level. He isn’t Todd Pinkston. He isn’t Roscoe Parrish. Hell, he isn’t even DeSean Jackson, who’s more of a vertical threat with his breakaway speed. No, Smith is a precise route-runner who has shown to take care of himself by avoiding the big hit — similar to how Marvin Harrison used to do by giving himself up after making a catch instead of extend plays and fighting for extra yards. It’s why Smith is often compared to the Hall of Famer.

It doesn’t matter, though, because pundits are still going to bring up Smith’s lack of size. And when (once again) talking about that very topic on NFL Network’s Good Morning Football on Tuesday, the likely first-rounder continued to mock those questioning his frame, while highlighting the things that will make him successful at the next level.

“We play football. We’re in a football business. We’re not weightlifting. We’re not bodybuilders,” he retorted when asked about his weight. “It’s football. That’s what we’re here for. All the other stuff is irrelevant.”

He told GMFB that it’s his attention to detail that will allow him to excel in the NFL.

“Just having different things that I can do different ways to get from point A to point B. Just overall football smarts. I feel like I’m one of the smartest players out there, and that just comes down to preparation and always wanting to be a step ahead of who I’m playing against.”

Whether you’re a fan of the Alabama Crimson Tide or not, this is awesome stuff from DeVonta Smith, because he’s absolutely right in standing up for himself here. Why should he be doubted over decades-old (and expired) stereotypes? We’ve seen guys like Lamar Jackson excel at quarterback despite his lanky frame. We’ve seen Russell Wilson become an annual MVP candidate despite not having “ideal” size at the position. And we’ve seen plenty of other skill position players perform at a high level as “tweeners”.

Who knows how great DeVonta Smith will be at the next level, but if he fails, it won’t be due to his lack of a “prototypical” frame for a wideout. The guy’s smart and he knows how to play at his current height and weight. And once he’s selected in the NFL Draft, he’s sure to be put on a program that’ll add more bulk to further protect himself anyway.

So let all the haters continue to doubt this kid, because any NFL teams that do — and decide to pass over him in the draft — are sure to regret it when he balls out.