DeVonta Smith Used To Do Push Ups In The Middle Of Class To Get Bigger, Says He Laughs At The Doubters Now 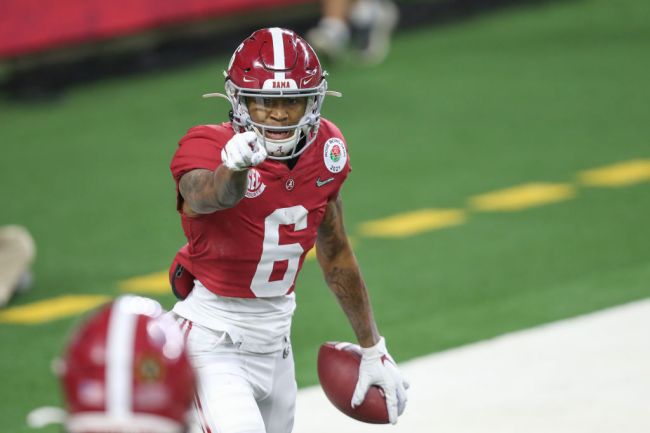 If there’s one knock against DeVonta Smith, it’s his size, but that clearly didn’t hold him back by playing for the best team in the nation in college, Alabama, in the toughest conference in college football, the SEC, and winning the 2020 Heisman Trophy. Nevertheless, his lanky frame has been a topic of discussion leading up to the NFL Draft.

Smith recently joined Masters Tesfatsion with Bleacher Report and his size became a topic of discussion. He explained that back in high school, comments about his size got under his skin a bit and to the point where he would drop down and do push ups in the middle of class as he would try to do at least 100 per day.

“Just throughout the day, I’d be in class and drop down and do some…Just trying to get bigger, just knowing that everybody is looking at me like ‘Oh, he’s small,’ so it was just like, doing some push-ups here and there isn’t going to hurt you,” Smith explained.

Smith doesn’t let the comments get to him now, he knows the accolades on his résumé and understands all those that doubted him aren’t about to be first-round draft picks in the upcoming NFL Draft.

“In high school I used to feel some type of way when people tell me that, but nah, I don’t really care. I mean, somebody say that, I’m gonna look at them and laugh,” Smith said. “I mean, it is what it is. At the end of the day I know that when I get on the field and I line up, I’m gonna do what I gotta do.”

.@DeVontaSmith_6 is 170 pounds with a hunger you can't measure 💯

"In high school I used to feel some type of way … Now I'm gonna look at 'em and laugh" pic.twitter.com/hilxWWsIdG

Smith led Alabama in receiving back-to-back seasons, which says a lot given just how talented the Crimson Tide were in the wide receiver department during his time in Tuscaloosa. Those that have doubted Smith over the years, including as early as last year, have been left eating their words and that trend will likely continue as he gets his professional career underway this season.