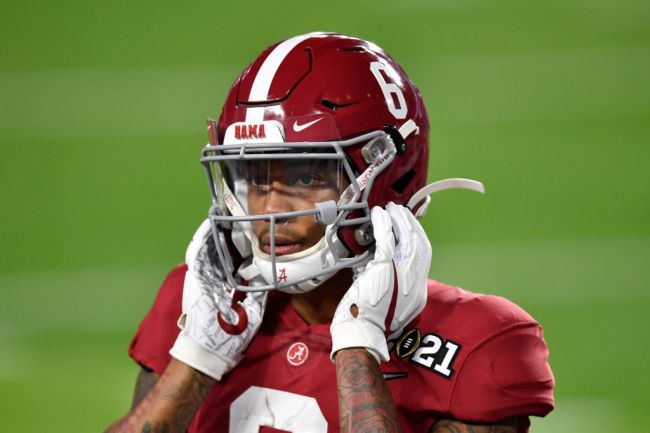 Heisman Trophy winner DeVonta Smith is expected to be one of the first wide receivers to have his name called at the 2021 NFL Draft, but his size is causing some concern for those on the next level. At Alabama’s Pro Day in late March, the 22-year-old said that he weighted 170 pounds. COVID-19 has caused the draft process to look different, so teams did not get to see their targets compete in a combine setting. However, roughly 150 prospects gathered briefly in Indianapolis on March 31 for the medical evaluation portion of the combine and Smith was in attendance, weighing in below his stated number.

NFL teams didn't get athletic testing numbers from the Indy medical combine earlier this month, but they did get measurements. And that meant, finally, they got Alabama WR DeVonta Smith on a scale.

The Louisiana-native had an incredible senior season in Tuscaloosa and recorded over 1,800 yards with 23 touchdowns in 2020. He has proved what he can do on a gridiron, and he’s a burner, so he doesn’t have to worry about taking too many big hits. And yet his intangibles have certain teams worried. He plays fast and he has never let his size affect him, but his athletic profile is something that can’t change.

To put his height-weight numbers in perspective, only 16 wide receivers have been measured at 170 pounds or less since 2000. DeSean Jackson highlights the list.

There are 16 WRs that weighed in at 170 pounds or less at the combine since 2000. Here's the top guys sorted by career AV. DeSean Jackson is best case scenario, who ran a 4.35. I like Smith a lot, and think he will be a good pro, but it would be a bit unprecedented. pic.twitter.com/lDAWRHuEjm

The NFL places significant value in physical traits. It’s just how it works. While that is all fine and well, there is nothing on film that shows strength as an issue for Smith. He plays bigger, tougher and more effective against press coverage than many of the other receivers in the 2021 class. He is never jammed at the line of scrimmage, he plays through contact and he holds his ground on jump balls.

DeVonta Smith put on a clinic in his Heisman-winning season⚡️🏆 pic.twitter.com/iLixL9nipe

The average weight of an NFL wide receiver sits around 6-foot-0, 200 pounds so 166 pounds is a number that will definitely make teams a little uncomfortable. There is no reason that Smith can’t put on some muscle on an NFL training program and his on-field play makes him a steal beyond the Top 10. If there is anyone who can break the mold for light receivers, it’s the man who was named the top player in college football.