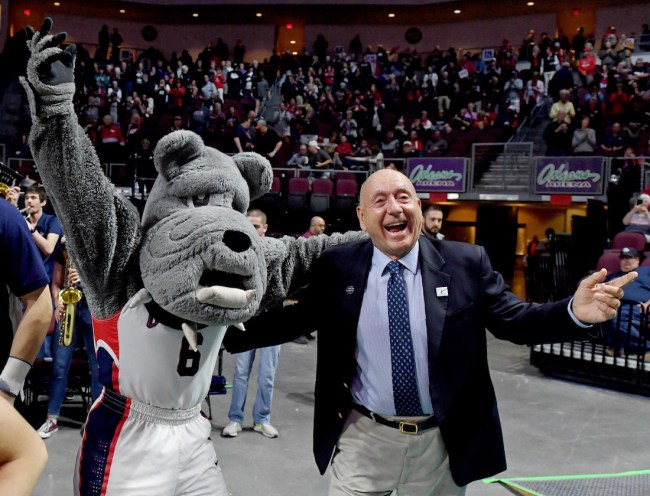 Dick Vitale is one of the loudest people on the planet, with the longtime and legendary college basketball announcer/analyst pretty much losing his voice by halftime of ever game he calls. But even when Dickie V doesn’t have a microphone in front of him, it appears as if he’s still yelling to get his point across.

That’s what appears to have happened on Friday morning when Vitale took to Twitter to express his extremely candid feelings about the college basketball Transfer Portal. While the current rule states a player must sit out a season before suiting up for a new program, the NCAA is about to vote to change that, making a unified rule that allows athletes to transfer without a penalty. As one would expect, this has thrown a huge wrench into recruiting, as well as retaining both players and coaches.

Despite the NCAA Tournament set to host its Final Four this weekend, Dick Vitale couldn’t just focus on that, and, instead, decided to use his Twitter to very much get his point across about this whole Transfer Portal situation.

Solve the argument & have the VBDI (vitale bald dome index )rule that would state coaches can leave w/o sitting & players can not easily. If a coach leaves or is fired allow players on those teams the right to transfer w/o having to sit out for 1 yr.

Also what a sick message we r sending to young ppl/ quit& just run when things get tough . What about coaches getting to develop players . Mid majors will suffer big time as soon as a player becomes a star big time programs will have messages out that he should move on .

Look their r times where transferring for the right reason is legit – just like in life where there r times in marriage a divorce is the proper decision . However what we are seeing now with the transfer portal is going to chase coaches out of the game . There is ZERO STABILITY!

In closing on this transfer topic I simply say allowing players to move on w/o sitting is going to be absolutely the WORSE rule to be implemented in the college game . College basketball is now facing a CHAOTIC & CRISIS situation that is totally out of control .

Sheesh, there’s a lot to unpack there, but the first thing I want to focus on is this: Who in the hell is allowing an 81-year-old like Dick Vitale tweet? Somebody take the phone out of his hands and give him a crossword puzzle to occupy his time with. That seems more suitable.

Second, while Dickie V tries to offer up a solution — designating recently retired Roy Williams as the CZAR title to help work with the NCAA on this Transfer Portal issue — he doesn’t necessarily recognize the obvious problem: Coaches having the ability to do whatever they want to and making millions in salary, while college basketball players aren’t making a dime and are currently being told to sit out a year if wanting to transfer because he/she changed their mind about a school. That’s sort of like being in an arranged marriage.

Finally, does anybody really care if a player transfers anymore? It’s not as if these kids are staying longer than about two years anyway. Like, as a Kentucky alum, I see a new crop of players coming in each year because of guys entering the NBA Draft, so it’s not as if fans aren’t used to the amount of turnover we’re seeing. And with an estimated 1,000 players expected to be in this year’s Transfer Portal, why wouldn’t some of these guys decide to at least test the waters to see if they may be able to get more playing time at school X than at school Y? They deserve to at least explore their options… after all, a scholarship isn’t a prison sentence.

With all due respect to Dick Vitale, the guy sounds even crazier than normal here, and needs to focus on the next few games of the NCAA Tournament instead of voicing an asinine opinion about college basketball’s transfer portal. Like any other human being in the country, should these players decide to change their minds about a program — despite the circumstances — they have the right to transfer elsewhere without punishment. It happens every single day in the workplace, as well as around college campuses with non student-athletes, so the same rules should apply to college basketball players.