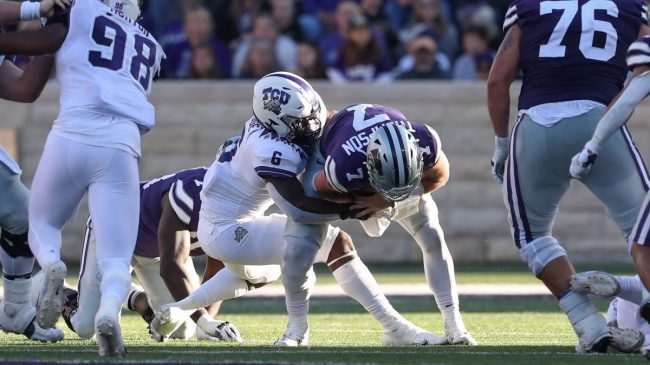 Things were already going pretty poorly for the Oklahoma Sooners on Saturday. After losing to Kansas State in Week 4 and falling out of the AP and USA Today Top 10, the Sooners trailed TCU 34-10 mid-way through the second quarter in Fort Worth.

Oklahoma fans were calling for first-year head coach Brent Venables to be fired and former coach Lincoln Riley to return after leaving for USC.

But then things got worse. Much, much worse.

Sooners quarterback Dillon Gabriel rolled out to pass. When he couldn’t find someone open, Gabriel opted to tuck it and run. He then slid down just before the first-down marker. TCU linebacker Jamoi Hodge either didn’t notice Gabriel sliding or didn’t care.

Hodge launched himself into Gabriel, seemingly knocking the QB out and drawing a flag for targeting.

Hodge was immediately ejected for targeting and, thankfully, Gabriel was able to walk off the field under his own power. But college football fans were livid over the hit. And it was more than just Sooners fans who were unhappy.

Finally a good representation on what a justifiable ejection looks like. https://t.co/YSIFdmS1pJ

This kid should be suspended for awhile, insanely dirty play here https://t.co/eH3kKf44IE

Not everyone appeared to have an issue with the hit, however.

Hate these type of plays and I hope Dillion is ok but when are we gonna put some responsibility on the QBs for not sliding earlier? 🤷🏾‍♂️ https://t.co/lLAfPzavR8

But most saw the hit for it was…

The hit may have been just the wake-up call the Sooners needed. Oklahoma scored a touchdown later in the drive to cut the lead to 34-17. They then got a stop on the followed Horned Frogs’ possession.

But the focus remains on Gabriel. Hopefully, the veteran is okay and does not suffer any long-term effects from the hit.