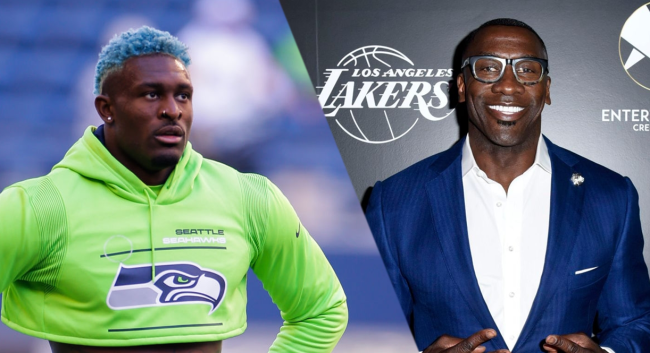 In the closing minutes of Sunday night’s Seahawks and Steelers game, Seattle wide receiver D.K. Metcalf made a crucial mistake that could have cost his team the game.

After making a catch, rather than stepping out of bounds to stop the clock, Metcalf instead tried to steamroll a defender and gain a few more yards.

Unfortunately, Metcalf ended up coughing up the football, but was saved by his teammate Freddie Swain who fell on the football, and quarterback Geno Smith who was able to spike the ball with one second left on the clock.

Madness on this play.@Seahawks get into field goal range with seconds left.

Not that it ended up mattering, because after Jason Myers kicked the tying field goal, the Seahawks still ended up losing 23 to 20 in overtime.

At the time though, no one knew that so Metcalf’s decision was more than a little questionable.

How Geno Smith was looking at DK Metcalf after that fumble #Seahawks #SeahawksvsSteelers #SundayNightFootball #NFL pic.twitter.com/I5FfrZsGx8

What was D. K thinking? Why try to play hero 🏈 in that situation?

Monday morning, Metcalf fired back at Shannon Sharpe on Twitter, calling the 6-foot-2, 228 pound Hall of Famer a “lil boy.”

Three hours later, Sharpe came right back at Metcalf, tweeting, “Nothing to question. That was ‘DUMB ASS’ play and your pride won’t let you admit it. ‘You’ can’t question anything I’ve done. Pray your resume will be as complete as mine, PRAY. Enjoy the rest of your day.”

About three hours after that, Metcalf jumped back on Twitter to fire another shot Sharpe’s way, calling him a “washed up wanna be.”

From the looks of it i can wipe my 💩 with yours! Continue to gossip you washed up wanna be. https://t.co/yjLZCdPWsu

Interesting use of the poop emoji.

And for what it’s worth, yes, Shannon Sharpe says a lot of dumb, ill-informed, and questionable things when he is yapping with Skip Bayless on FS1, but Metcalf might want to check the record book then next time he starts calling people names.

Sharpe is a three-time Super Bowl champion, an eight-time Pro Bowler, and a Pro Football Hall of Famer after catching 815 passes for 10,060 yards and 62 touchdowns over a 14 year NFL career.

What? Do you know who you're talking to DK? pic.twitter.com/Cs4hyhZDKc