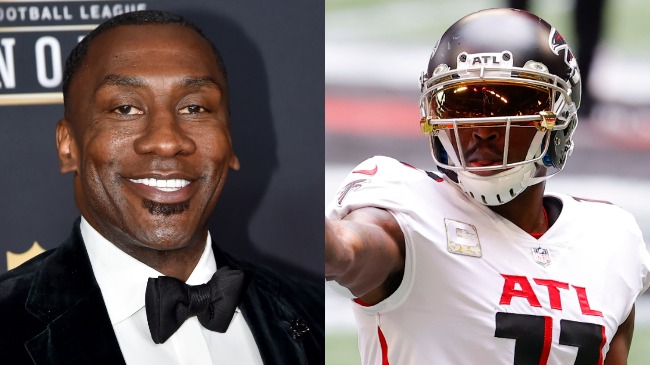 Shannon Sharpe proved this week that a scoop is worthy of violating California Penal Code Sec. 632 and potentially facing a misdemeanor charge.

This is to say nothing of the wedge Sharpe’s on-air interview with Julio Jones put between FOX and the NFL, who are in the midst of a $2 billion, 11-season deal to keep its Sunday afternoon NFL TV package on the network.

For the uneducated, Shannon Sharpe cold called Jones live on air on Monday and asked the seven-time Pro Bowler if he planned to stay in Atlanta next season and if the Dallas rumors had any legs.

“I’m out of there,” Jones told Sharpe. “I ain’t going to Dallas, man. I never thought about going to them.”

Shannon Sharpe just cold called Julio Jones and asked him if he was going to Dallas.

This needs to be apart of every day content. pic.twitter.com/0ZA6dve6xn

It was not obvious that Julio Jones, who Sharpe refers to as “his nephew,” knew his admission was being broadcasted to hundreds of thousands of people.

According to Front Office Sports, Jones’ reps at Creative Artists Agency claim this is entrapment is a “huge deal” and the Falcons, who claimed to be “blindsided,” could seek an on-air apology. What’s more, according to Sports Illustrated, is that the incident could tarnish FOX’s relationship with the Falcons and curtail the network’s access to high-profile games this upcoming season. A source told FOS that the interview created a “massive stink bomb” for FOX.

“The Falcons are not going to be happy with this — and they will express their angst to the NFL,” said Andrew Brandt, the former Green Bay Packers vice president who now writes the “Sunday Seven” newsletter. “Payback’s too strong a word. But they will hope for some kind of stroke down the road.”

Ah yes, and then there’s the potential legal ramifications.

Undisputed is also produced out of FOX Sports’ studios in Los Angeles. California is a two-party consent state when it comes to capturing a phone conversation similar to that of Sharpe and Jones.

But, both Jones and Sharpe would have needed prior knowledge of the call being aired and recorded. [via SI]

The misdemeanor could carry with it a $2,000 fine and/or a year in jail.