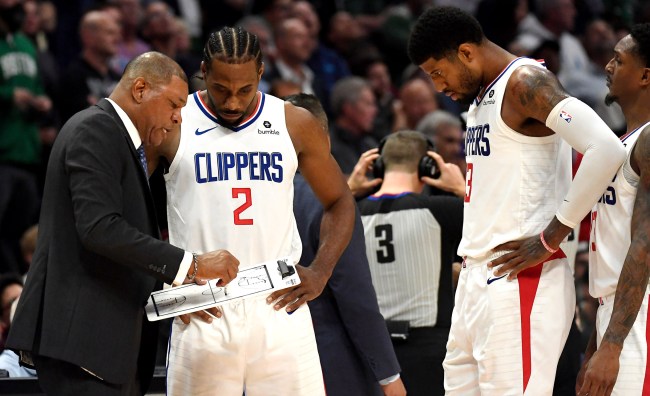 Will the 2019-20 NBA season ever actually resume? It certainly will if LeBron James has anything to say about it.

The league has already floated the idea of playing games at Walt Disney World Resort in Orlando as an alternative venue if the NBA decides to sequester everyone and play games at a single site.

As for how the NBA will handle a shortened season and determine which teams will make, what may end up being a shortened playoffs, a few suggestions have already been made, one that involves a play-in tournament to determine the lower seeds for each conference.

This is one of the several ideas that Los Angeles Clippers head coach Doc Rivers is hoping will happen, with a little twist.

“The one I like the best is [seeds] 7, 8, 9 and 10 have a playoff to get into playoffs,” Rivers said on the Cedric Maxwell Podcast. “And while they’re playing, one through 6 can train. So we get to do all the practices, 7, 8, 9, 10 get to play. Now, the advantage they have is in the first round, you’ve got to play teams that have been playing games which you haven’t played, but they haven’t had as much practice and we have. So I I think it’d be really cool that way.”

If Rivers’ concept ends up being chosen that would mean, if the season ended as it stands right now, would make the Nets vs. Hornets and Magic vs. Wizards in the East, while over in the West it would be the Mavericks vs. Pelicans and Grizzlies vs. Trail Blazers in the play-in round.

The Bulls, Knicks, Pistons, Hawks, Kings, Spurs and Suns would all fall a game or two short of making it.

Rivers also pointed out another rather unique scene we might get during this year’s NBA playoffs. “It doesn’t look like we’re gonna have fans, that’s unusual,” he told Maxwell. “I don’t even know how that would work. The only thing that I jokingly told the league is you better put earmuffs on the refs.”

Good point. But it sure will be fun to watch (and hear).