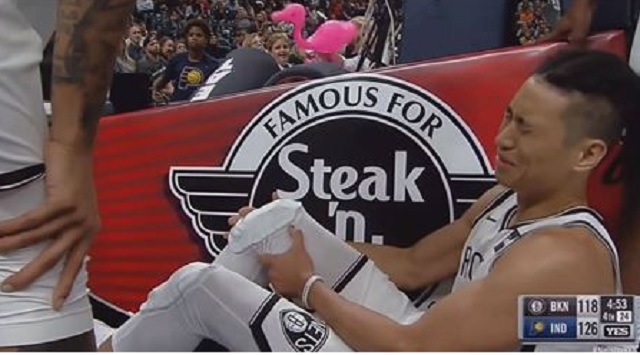 The start of the NBA season was marred with injuries of two of the league’s most recognizable stars–I don’t need to remind you of Gordon Hayward’s injury, but Jeremy Lin’s was a little less repulsive.

The 29-year-old Brooklyn Nets guard ruptured his right patellar tendon during Wednesday’s season opener, ending his season after just playing just 36 games last season due to hamstring issues. He signed a three-year, $36 million deal at the beginning of last season and he’ll be lucky to play out half that contract by the end of next.

Man the look on Jeremy Lin’s face when he realizes something’s wrong is heartbreaking. I hate injuries. pic.twitter.com/BcKsxLrCnZ

“A number of things have to happen. One, it has to be healed back into place. Second, you have to have the right tension in that tendon. If it heals and it’s stretched out, it doesn’t matter how strong your quadriceps are, you can’t generate the same force through the knee.

“For someone who has to twist, sprint, jump and pivot, the rehab’s going to be longer and more involved. The problem is even though the injury is the same … how it happens to each person, how it heals, how as an individual they respond to injury can be very different. Somebody like Jeremy Lin could make a 100 percent recovery, or he could end up like Victor Cruz, only playing at 80 percent of past potential. You can’t predict that type of thing, that individual biology.”

“If the tendon is ripped directly off the bone — off the kneecap is most typical, or sometimes off the shinbone — … that’s the best scenario, because the bulk of the tendon’s intact. You can stitch it back in place,” Gladstone told The Post. “When the rip is in the middle, it’s more difficult and trickier to put it back together. … When [tendons] rip, you end up with two mop ends.”

Interesting insight into a temperamental injury. Best of luck to Lin in his recovery.