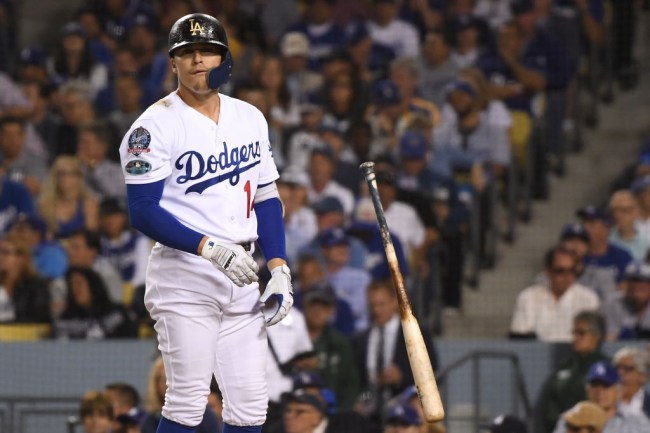 The Los Angeles Dodgers laid an egg in Game 3 of the National League Championship Series Monday, falling 4-0 of the Milwaukee Brewers, who now lead the series 2-1.

It was a particularly frustrating night for fans at Dodger Stadium, who watched their team go 0-for-10 with runners in scoring position and strike out 14 times in the scoreless loss.

Dodgers outfielder Enrique Hernandez, who is 0-for-6 with three strikeouts in the series, decided to allot some of the blame to Dodger fans, the same fans who set a club record this season for attendance and likely dropped hundreds of dollars on tickets to watch their team play like a bunch of wimps. The 27-year-old told the Los Angeles Times:

Hernandez eventually came around and put some of the blame on the players who lost the game.

Kike also ripped the fans for their perceived harsh treatment of catcher Yasmani Grandal, who is having a piss poor series and was on the receiving end of a chorus of boos for letting a ball pass that resulted in a Brewers’ run. Fans began chanting “We want Austin! We want Austin!’’ in reference to backup catcher Austin Barnes.

“If they think they can do it, go ahead, put on your gear, and go catch 99 with breaking balls that have a lot of movement,” Hernandez said, according to Alden Gonzalez of ESPN. “He’s been one of the best catchers in the game for a while now. He’s having a bit of a rough patch.”

“He’s not trying to have a hard time behind home plate or anything like that. But it sucks that there’s nothing going on in the stands. Since the first inning when (Ryan) Braun hit that double, the stadium kind of went quiet for the rest of the evening, and it sucks that they got loud just to show (up) Yasmani.”

Yo Kike, no one is required to cheer for you or your team when you strand double-digit runners and fail to get on the scoreboard at home in October. Fans pay your salary, you produce, then you can get your much needed pat on the head. Jesus dude, be softer.