Dodgers Hitters, Coaches Admit They Were Thrilled When Blake Snell Was Pulled From Game 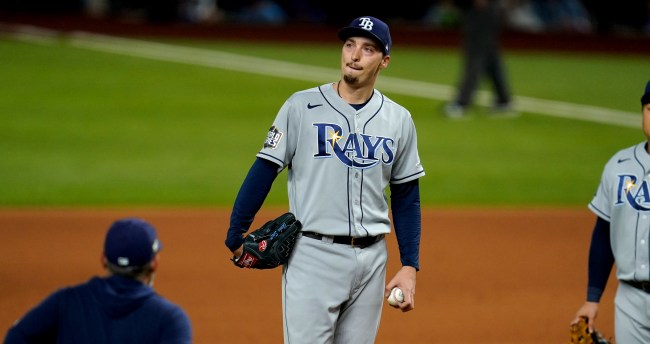 Los Angeles Dodgers hitters like Cody Bellinger and Mookie Betts and the team’s manager Dave Roberts admitted after winning Game 6 and the World Series that they were quite happy to see Tampa Bay Rays manager Kevin Cash remove pitcher Blake Snell from the game.

To recap, Blake Snell, the 2018 Cy Young Award winner, was pulled from the game by Cash he gave up just his second hit of the night after striking out nine batters (with zero walks) in 5-1/3 innings as he was about to face four hitters who were a combined 0-for-8 with 7 strikeouts against him in the game.

Roughly 99 percent of the people watching the game thought it was a dumb idea (A.J. Hinch, who pulled starter Zach Greinke from Game 7 last year after allowing just two hits in 6-1/3 innings, probably wasn’t one of them) and it certainly was not what Snell risked his life for.

After the game, Bellinger was asked about Cash taking Snell out of the game and with a big grin on his face said he was “shocked” by the decision.

“Yeah, I was shocked. We were kind of joking around like, alright, ‘way to get him out of there in the 6th like we planned,’ but [laughs] not like that,” Bellinger told Alex Rodriguez. “Then we just kind of rallied from there, and Snell had his stuff today. He was gross, so yeah, I would say that it uplifted us.”

Cody Bellinger has a chuckle over Kevin Cash lifting Blake Snell in the sixth. pic.twitter.com/JeCgsrg3Wd

Dodgers manager Dave Roberts also said after the win, “I was pretty happy. Mookie looked at me with a little smile. We were all excited that Snell was out of the game.”

Speaking of Mookie Betts, once he saw he wasn’t going to have to face Snell for a third time after striking out twice, told Fox, “I think at that point I was like, ‘I got a chance.’ Snell was rolling. He was tough.”

Betts, in case you missed it, hit a double off new Rays pitcher Nick Anderson then scored what would end up being the World Series clinching run.

I don’t know about you, but I cannot wait for Blake Snell’s next Twitch session.