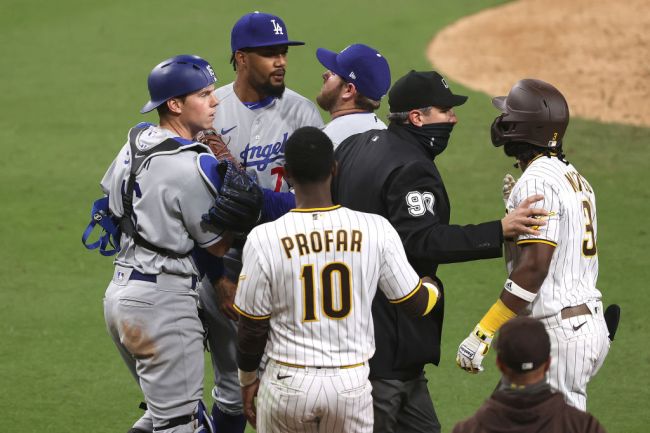 Friday night’s showdown between the Dodgers and the Padres was as exciting as advertised. Los Angeles and San Diego finished as the top two teams in the National League West and met in the NLDS last season, ending in a three-game sweep for the eventual World Series champions. This season is expected to play out to a similar result with both California teams battling it out for the division’s top spot and their first meeting of 19 meetings in 2021 began with a bang. Literally.

After falling behind 1-0, 26-year-old outfielder Luke Raley tied the game up for the Dodgers with his first MLB home run in the top of the 5th inning.

Not long thereafter, Fernando Tatís Jr. tied the game with a solo shot of his own. The $340-million 22-year-old dislocated his shoulder during a game on April 5th and had not been in the lineup for the following 11 days. Initial concern worried that he would require surgery, but that turned out not to be the case and he was activated on Friday. His power was clearly not affected by the injury because he took Walker Buehler DEEP and sent the limited-capacity crowd into a frenzy. Imagine when the stadium is packed again?!

Both teams got their bats on the ball, but it was Los Angeles that took a 6-5 lead into the bottom of the ninth, when Manny Machado got crafty on the base path to tie things up against his former team.

Manny Machado hurts himself on a swing, works a walk, decides to stay in the game, steals second, advances to third on a wild pitch and then scores the game-tying run in the bottom of the ninth inning pic.twitter.com/bLMi9N7sjg

It was well after 10:00 p.m. PST when the first nine innings came to their conclusion with a 6-6 tie and the game went into extra innings. The fireworks did not stop there and things got chippy fast. As such heated rivals playing in a competitive space for the first time in a long time, it was bound to get heated at some point, and the benches cleared in game one. After Dodgers pitcher Dennis Santana hit Jorge Mateo (coincidentally the third time he had been hit in four days) to put runners on first and third with one out, the two exchanged words with one another as Mateo walked toward first base. Players from both teams rushed in from the dugouts and bullpens to try and sort things out.

Benches clear in the first Dodgers-Padres matchup of the season! pic.twitter.com/62gMqLIwiv

No punches were thrown in the kerfuffle, but everyone wanted to get involved— even the fans. As the pitchers were running out of the bullpens, one fan decided he wanted to get in on the action and hopped onto the field, looking like he was ready to knock someone out. His quest to join the skirmish failed before he reached the infield and a security guard SLAMMED him to the ground.

We have benches clearing, the bullpen running in and a fan charging the field. This game is drunk. #Padres #Dodgers pic.twitter.com/cj2PlzlUyu

They were tackling a fan who ran in with the bullpens lol pic.twitter.com/36jK4Cfpat

Things calmed down fairly quickly and the game resumed in extras. It wasn’t until the top of the 12th before another run was scored when Corey Seager broke things open with a two-run blast.

SEAGER STRIKES IN THE 12th! pic.twitter.com/k4CD07GJij

Los Angeles went on to scored five runs in the inning and even pitcher David Price, who came in during the 11th, knocked in a run to put San Diego in a tough spot. The Dodgers pitcher hit a sac fly off of Padres shortstop Jake Cronenworth (the team had run out of arms) and it was caught by Friars pitcher Joe Musgrove, who was needed in left field. Cronenworth, an infielder, then struck out Mookie Betts. Baseball is weird.

You read all of that right pic.twitter.com/howDliZtmJ

Price again toed the rubber in the bottom of the 12th and closed out the win with a quick three-out save.

David Price wasn't supposed to pitch on Friday. He went and told the Dodgers he was ready to go if needed.

What a team player this guy is.

He became the first Dodgers relief pitcher with a win, 4+ strikeouts and an RBI in an extra-inning game since Nap Rucker on July 9, 1915. After 4 hours and 57 minutes, the game ended on early Saturday morning after one of the more wild evenings. The first game of the three-game series felt a lot like a playoff game and both teams are on a collision course for the postseason. The NL West is going to be fun.