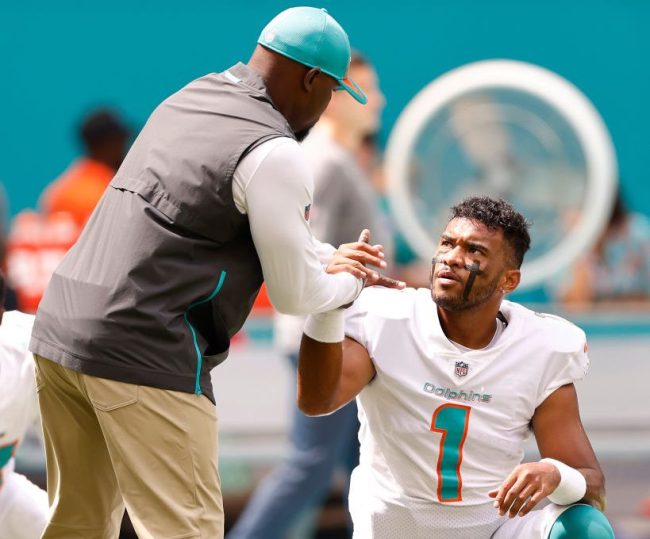 A lot of speculation has been made about the Miami Dolphins and their quarterback position over the past few weeks. As rumors continue to circulate regarding the organization and its future under center, Brian Flores made his intentions very clear.

The third-year head coach tried to set the record straight earlier this week.

“Tua is our quarterback. I’ve said that multiple times. I’ve said that to him,” Flores said. “I try to be honest and transparent with our players. That’s what I’ve done.”

Flores has told the media multiple times that Tua Tagovailoa will be the team’s starting quarterback, and since returning from a rib injury, Tagovailoa has played very well. He has 620 yards passing and six touchdowns over the past two games.

And yet, reports continue surface regarding Miami’s interest in trading for Deshaun Watson. Should that happen, it is assumed that Watson would become the starter on Day 1.

However, Flores spoke with the media on Friday morning and made it explicitly clear that the team is not trading for Watson ahead of the Nov. 2 trade deadline. Or, at least, if the Dolphins front office does pull off a blockbuster trade at the buzzer, Flores says that — barring injury — it is Tagovailoa’s team in 2021.

Brian Flores says barring injury, Tua is the Dolphins QB for the rest of 2021

Boom. Shut the door. Speculation over.

Miami’s continued reported interest in Watson might be real, but based on Flores’ comments, the organization is not making a deal. It’s Tagovailoa’s team.

Now, that isn’t to say that Miami might not make a deal or move in another direction in the offseason. Or, should the second-year quarterback out of Alabama keep playing well, the Dolphins might be willing to keep him around.

But for right now, Watson is either staying put in Houston or heading somewhere other than Florida.