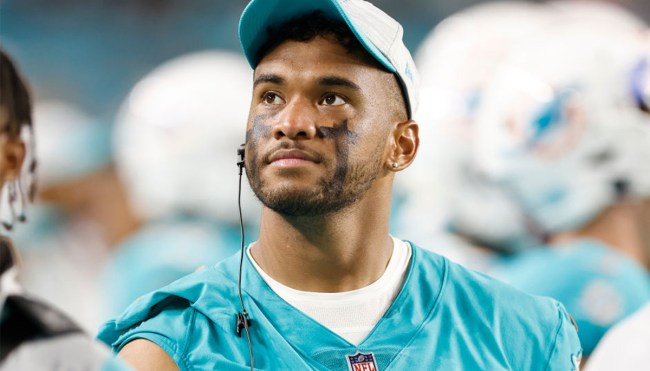 Recent rumors have been circulating around the NFL linking the Miami Dolphins to a blockbuster trade involving Houston quarterback Deshaun Watson. That move would have likely removed Tua Tagovailoa from under center, and possibly sent him out of Miami altogether.

The main reason for Watson’s tie to the Dolphins was head coach Brian Flores, who was interested in pursuing a deal for the Pro Bowl passer ahead of the 2022 season. The team’s management, however, wasn’t quite as thrilled about the idea of giving up on their former first-round pick in Tagovailoa. That disagreement, among other things, led to Flores’s firing earlier this week.

With Flores out, the odds of Miami looking for another signal caller diminish greatly. Essentially, they chose their quarterback over their head coach, who’s won 19 games over the last two seasons. It’s a move that many are already questioning.

Firing Flores to keep Tua is such a Dolphins move https://t.co/Wg4E1Dm3QS

They fired Flores and used him as the scapegoat to justify taking Tua over Herbert 🤦🏽‍♂️ https://t.co/i4gQZolWiw

I'll never forget @ScottBarrettDFB writing his post-draft press conference and flat out telling our company slack "I don't think Flores likes Tua." I was like "WTF, they just drafted the guy…"

He was right. Flores got fired because he doesn't like Tua. https://t.co/SgVaoEEDJP

No one really believes this https://t.co/F7mcAFmkPE

Putting all of their eggs in the Tua Tagovailoa basket could prove costly. Watson, while having baggage, has been one of the league’s top passers since entering the NFL back in 2017. Tagovailoa, meanwhile, is far from proven. Since coming into the league last year, he’s posted a 13-8 overall record.

This year, the left-handed gunslinger was 7-5 with 16 touchdowns to 10 interceptions. He’s not been able to get the Dolphins to the playoffs and often teeters on the edge of mediocrity. Had they gone after Watson, Miami would’ve become an immediate contender in the AFC East.

Next year will prove to be a massive test for Dolphins’ ownership. If this move doesn’t pay off, we’ll be left wondering what could’ve been had the team hung on to Brian Flores.