Donations Flood In For The Guy Who Put OU’s Spencer Jones In The Hospital, And Texas Is In A Very Giving Mood 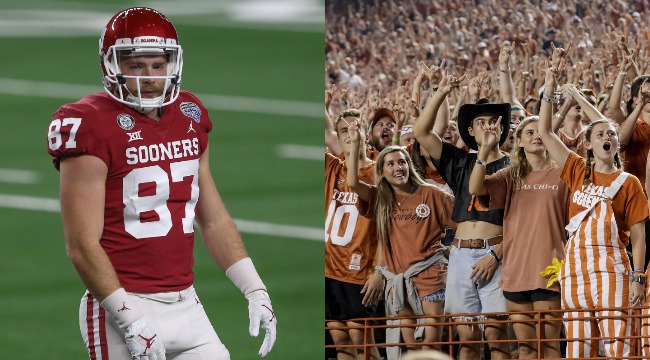 Victims aside, bathroom bar fights are a welcomed relic of a freer time, which is probably why the brouhaha in a piss-soaked Oklahoma dive bar nearly two weeks ago has been a slow burn that continues to capture the attention of America.

Oklahoma receiver Spencer Jones is reportedly recovering after suffering a shattered left orbital bone in the bathroom at Norman’s Logies on the Corner that resulted in a four-hour operation.

While the impetus for the melee is still under investigation, both sides are essentially assigning blame to the other party.

Jones’ lawyer Woody Glass claimed Jones was “trying to be a peacekeeper,” while Braden Brown—the dude in the beanie who locked up with Jean Jacket Guy—spoke out on Twitter about claiming that they were forced to utilize their years of MMA training because Spencer and his friend “gave us no options unfortunately.”

Walker Brown, the man who put Jones in the hospital, is now behind a GoFundMe page requesting donations for “a surgery from an injury I received while defending myself.” His attorney claims Brown suffered a “torn bicep” in the scuffle.

I will say that YES, there was something that occurred prior to the start of the video as my nose doesn’t bleed for no reason. After I hire an attorney, I will make a statement so you will know my side of the story. Thank you again for all of the support.

Northeasterners: If you need another reminder of just how rabid the college football culture is in the south, here’s example number 1,287,952: countless people chipping in to pay the medical bills of a total stranger at a time when 19 million people are receiving unemployment aid solely due to the fact that the victim plays football for a rival squad.

Just a quick reminder: last time I checked, millions of Texans were still in the dark from a full-blown power crisis. Erroneous on all accounts…

The South does not fuck around. Sheesh.

*Alabama has entered the chat* 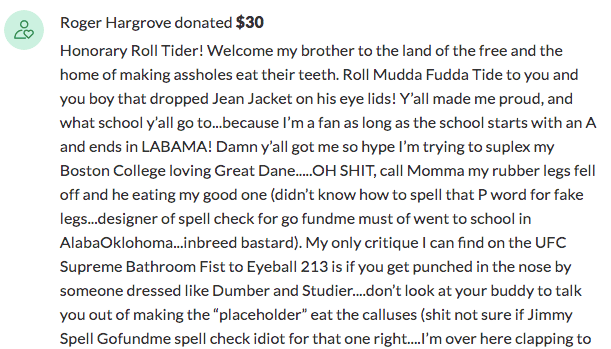