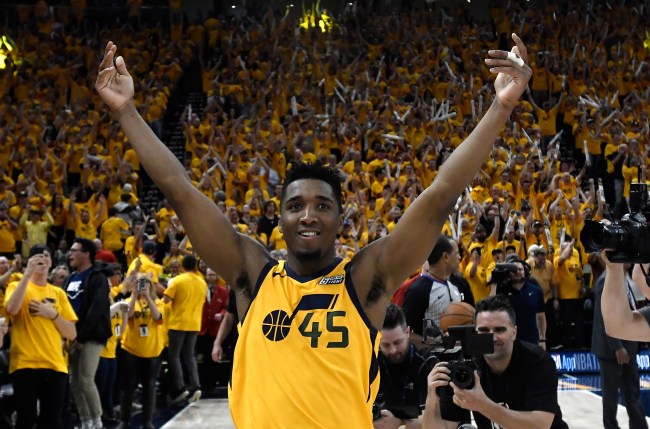 Utah Jazz point guard Donovan Mitchell was living his best life yesterday thanks to a tweet from a random fan. Based on his Twitter timeline, Donovan didn’t have any big 4th of July plans in the works. Instead of spending $$$$$ to host a party himself and invite all his friends over, Donovan pulled off something that only a celebrity with social media clout could do.

He took to Twitter and asked where all the Independence Day parties were at around Salt Lake and implied that he might just swing on by if the party looked fun enough, which is exactly what happened when one Jazz fan in the Salt Lake City area sent him a tweet showing an enormous house with a waterslide. The fan said the party was ‘right by Coach (Quin) Snyder’s new house’ and that was enough to get Donovan to roll by the party.

Here’s how it all transpired on Twitter, including Donovan Mitchell throwing down in a game of pool basketball with some random fans:

This is my cousin with the Spida in Utah! Donovan Mitchell is true to his word! 🏀🕷❤️❤️❤️ pic.twitter.com/eqTuPwBwCd

I can’t help but think Utah is the only place in America where this would happen. You’re never going to see a player from the Knicks, Bulls, Lakers, or Celtics show up at a random 4th of July party around one of those cities. It’s not happening in a million years. Something about Utah being Utah makes this possible, and Donovan Mitchell being one of the chillest dudes in the NBA.

By the way, Donovan Mitchell’s nickname got an official entry in the dictionary last week, in case you missed that story.