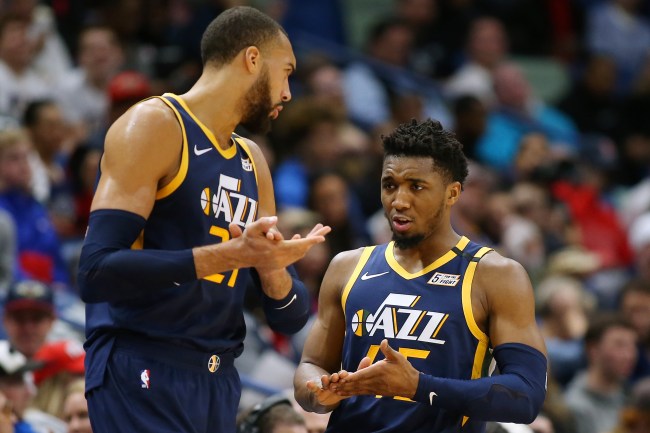 Donovan Mitchell and Rudy Gobert had a ton of friction prior to the NBA lockdown in March, with the latter joking about the seriousness of COVID-19 prior to becoming the first pro athlete who tested positive for it. It was a bad look for Gobert, especially after he reportedly entered the Jazz locker room and carelessly joked with some of his teammates about the virus — Mitchell being one of them.

A few days later, both Mitchell and Gobert had tested positive for the virus, the league was suspended, and the two All-Stars were said to have some hard feelings between them because of all the things that transpired. While everyone knew there would be some time to talk and make up, it turns out it took a helluva lot longer than one would think.

According to a recent ESPN piece by Tim McMahon, Donovan Mitchell didn’t talk to Rudy Gobert for an entire month after the league was shutdown, which can’t be a great thing to hear if you’re a Jazz fan. Take a look at some of the details from McMahon’s article.

The Jazz wanted to start virtual team meetings and workouts, but Gobert told teammates in early April that he wouldn’t feel right participating until he had a discussion with Mitchell. A month into the NBA hiatus, Gobert and Mitchell talked.

Sheesh, talk about a lot of dysfunction, huh? But it gets even worse, because, according to the ESPN article, Mitchell was so livid with Gobert that the shooting guard blamed his big man teammate for infecting him with the virus; which sure didn’t help expedite the forgiving process.

Luckily, both Donovan Mitchell and Rudy Gobert were able to make up and (hopefully) move on from what happened a few months ago. But, even so, Mitchell talked about how the two might not have the best relationship.

“For us, it’s like, there’s going to be tension,” said Mitchell, who was adamant that their long-uneasy relationship didn’t influence his reaction toward Gobert after testing positive for the coronavirus. “There’s going to be back-and-forth. Obviously, I feel like I should be right here, he feels like he should be right there. But it’s always going to happen. It happens on every team … “So I feel like in a work environment, you’re not going to always get along or go out to eat and hang out with your teammates. So that’s that.”

Now, it should be said that coworkers don’t need to be all buddy-buddy in order to be successful, but, still, when it comes to a team sport like basketball, most Jazz fans probably want their team’s two best players to be a little bit closer than Mitchell described. Plus, with Gobert recently revealing how COVID-19 symptoms are still impacting him months later, this is still all very fresh in everybody’s minds.

Who knows what might happen in the future, but, for now, Mitchell and Gobert seem to be playing nice, working towards a resolution and prepping for a return together. Still, their relationship will be something to watch as the NBA returns later this month.