Take The Titans And The Points, Drake Just Dropped His Curse On Lamar Jackson And The Ravens 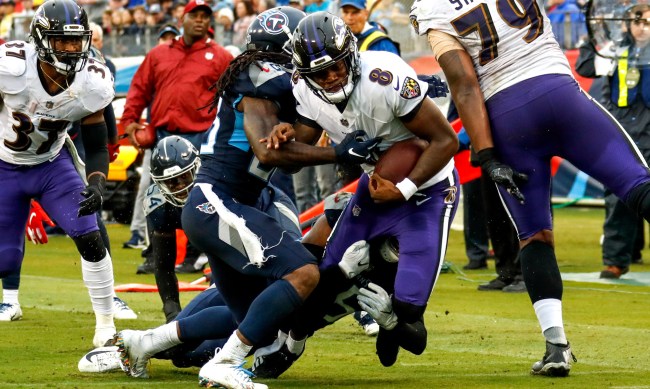 As a Tennessee Titans fan, yes, we do exist, we get together every week during the NFL season in the back room at a B-Dubs (oh, and you’re welcome, America), I was more than a little concerned when I realized that the Oilers Titans were going to have to face Lamar Jackson and the Baltimore Ravens instead of the Kansas City Chiefs this coming weekend. (No offense, Patrick Mahomes, but the Ravens put up 80 more points than your team did this year.)

Heck, even Titans head coach and Dynasty Slayer Mike Vrabel doesn’t know what to do to stop Lamar Jackson from running wild all over Tennessee.

Vrabel was asked about how to stop Lamar Jackson. “Other than try and tie his shoelaces together?”

Thankfully, all my worries have been put to rest because, as he has done with Anthony Joshua, the Toronto Maple Leafs, the Alabama Crimson Tide, and numerous others, Drake just went and dropped his infamous curse on Jackson and the Ravens.

For you see, on Tuesday, Drake posted a photo wishing Lamar Jackson a happy birthday with some article of clothing bearing the word “Truss” on it.

“Truss” is like the Ravens slogan this year. I have no idea what it means.

The Ravens are something like 9-point favorites going into Saturday’s game, but that line is about to shift because I am betting the goddamn house on Tennessee now.

And I am far from the only one following that line of thinking. Many Ravens fans are very, very upset.

With all due respect, I’mma need Drake to hold off on the Lamar Jackson support till after the #NFLPlayoffs. #RavensFlock rebukes this! 🙅🏾‍♂️🚫 pic.twitter.com/B644cKO6AH

Welp. It was fun while it lasted boys. https://t.co/bgrM0KhsDr

Nooooooo! Sir or Maam...take this down immediately! Pour bleach and fire on the whole account and say 10 Hail Marys. pic.twitter.com/Anh2vvxKkU

Go away Drake (feel like i should board up the windows and write that. like a hurricane is coming) 😶

Well it was a good run 😔 pic.twitter.com/nQlVnGv54M

This isn't good, Jesus Christ why?!?

Well that’s a wrap. They are losing this weekend.

Are you god damn serious @Ravens? Delete this shit now

But didn’t the Drake curse get broken when the Toronto Raptors won the NBA title?

Everything I own on the Titans this weekend.