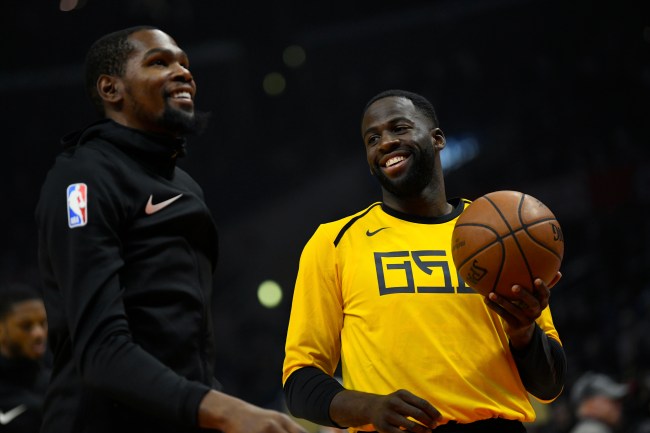 Despite playing on rival teams, Draymond Green and LeBron James have developed a close friendship off the court. Green has appeared several times on LeBron’s talk show “The Shop” and has even signed with Klutch Sports, the agency that is run by Bron’s close friend Rich Paul.

During an interview on Paul Rivera’s podcast, Green spoke about how James paved the way for NBA players to get into the entertainment industry. Green went on to say that certain players are going as far as imitating LeBron’s businesses to a T.

Via The Paul Rivera Podcast

He laid the blueprint out and I think so many people are afraid to say that they try to follow him. So many people make a mistake trying to mimic what Bron and Mav and Rich and Randy have accomplished. People make mistakes trying to mimic it with a twist. They say oh yeah we’re going to do that but then we’re going to add this twist to say that it’s our idea and that twist completely fucks the idea up (laughs)

Many felt that Green was taking a subliminal shot at teammate Kevin Durant, who has several businesses off the court that are similar to LeBron’s.

damn. I wonder who Draymond’s talking about pic.twitter.com/oqjPuLAPcN

Is draymond talking about who I think it is 🤔

I peeped this a while ago. Dude does a remixed version of everything Bron does but wonders why people still largely see him as #2. Either do it all the way or blaze your own trail.

LMAO at Draymond. KD def ain’t coming back after this season. He’s right but at the same time, he begged KD to come to the Warriors.

Haha KD is such a clown. He wants to be Lebron so bad https://t.co/qemV5VcRYS

I’m not sure Draymond is specifically talking about Durant here but he is right that there are several players straight up biting LeBron’s style. Even Steph Curry has several businesses that are similar to LeBron’s. At the end of the day there will always be copycats in business and LeBron just happened to be the “blueprint” as Draymond said.