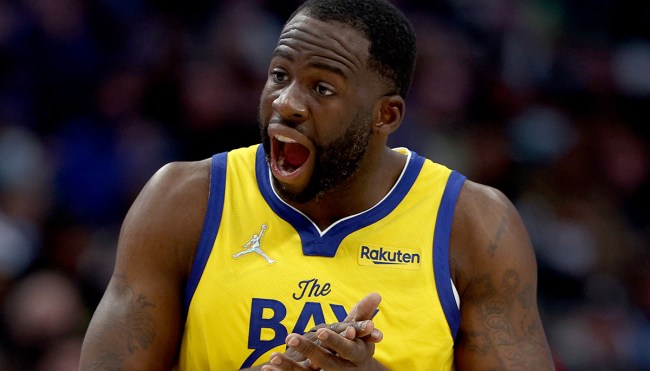 The Warriors took a 1-0 lead in their second-round playoff showdown with the Grizzlies on Sunday in a nail-biter that ended with Golden State walking away with a 117-116 win despite lacking the services of Draymond Green for the entire second half courtesy of a very controversial foul call.

Green was booted from the contest with less than two minutes to go in the second quarter after grabbing Brandon Clarke’s jersey during a play in the paint, and while there was no doubt he committed a foul, officials left plenty of fans scratching their heads when they determined Green was guilty of a Flagrant 2.

The formidable Warriors defender declined to speak to the media after the game, but fans who were hoping to hear his thoughts on the matter got what they wished for when he headed back to his hotel to record an emergency episode of The Draymond Green Show where he addressed the situation.

“One thing about that foul is I actually tried to hold him up. I wasn’t told anything because I left the court, but guys were told I was ejected for throwing him down, which is very interesting because even once he hit the ground I was still holding his jersey up.

At this point, I kind of expect things like that. I’ve been suspended from Game 5 of the NBA Finals…Not surprising to me at all.

When they reviewed the foul for as long as they reviewed it, I said to myself, ‘Hmmm, I wonder what they could be deciding that could possibly take this long.’ I’m actually dumb enough to think I wasn’t going to get a Flagrant 1. Talk about an idiot. You want to call anybody an idiot, look no further than Draymond Green himself…

I was about to start dancing to the crowd yelling ‘Kick him out’ to taunt them because, like, kick him out for that? When I was about to edge up off the scorers’ table, something said to me, ‘But it’s you involved in this play, Draymond, so because it’s you involved in this play, you probably shouldn’t dance, because you should probably always expect the unexpected…’

The playoffs are a little tougher and not as soft as the regular season. You can bump a little more and get away with a little more. We’ve seen some questionable calls in the first round—some things didn’t get reviewed—sometimes it’s a just case-by-case thing; a reputation thing. I think tonight was probably a reputation thing more than a hard foul.

Under NBA rules, players are hit with an automatic one-game suspension if they rack up four or more “flagrant points” over the course of the postseason (a policy Green fell victim to during the 2016 Finals), so I guess we’ll just have to wait and see what the league does once it gets a chance to review the call.